Is this “ask your doctor” advertisement educational or overly emotional? 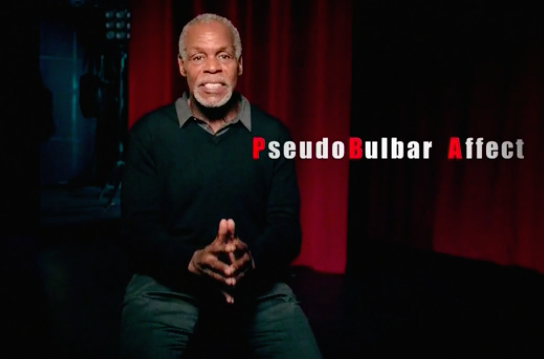 An overhead light drawing attention to his face, actor Danny Glover starts to cry, dropping his head into one hand — then, he abruptly switches over to deep belly laughs, before resuming a straight face. “When I act, if I do this it’s totally in my control,” he says, getting to the point: “But for someone with pseudobulbar affect, choosing to cry or laugh may not be your decision.”

The 60-second TV advertisement, which ran widely late last year, concerns a neurological condition known by the acronym PBA, characterized by inappropriate, uncontrolled outbursts of laughing or crying. Though no drug is mentioned, the advertisement is sponsored by Avanir Pharmaceuticals, an Aliso Viejo, Calif., firm that launched Nuedexta, a pricey, brand-name medicine that targets the disorder. The ad ends by referring people to a website and toll-free number for more information.

PBA is real, mostly affecting people with neurological conditions such as multiple sclerosis, a recent stroke or Lou Gehrig’s disease. It runs the spectrum from mild to severe impairment. Because the definition of the condition is ambiguous, estimates of its prevalence vary widely. Some clinicians say PBA is relatively uncommon among their patients, while Avanir sets the number at nearly 2 million.

But the ad campaign has helped fuel the controversy over how direct-to-consumer (DTC) advertising — typified by ads that call on you to “ask your doctor” about a possible treatment — takes niche medicine and promotes its use for a broad range of patients and fosters the use of pricey prescription products when cheaper ones might suffice.

“I suspect this disease is being redefined to include overly emotional people” through advertising, said Adriane Fugh-Berman, a doctor who teaches at Georgetown University Medical Center and has investigated pharmaceutical marketing practices. The United States is one of two countries that allows advertising of prescription drugs.

Not so, says the company in a written statement outlining that its efforts are “focused on raising awareness about PBA to help people better understand the symptoms of a condition that is often overlooked, misunderstood and misdiagnosed.”

The case of Nuedexta is notable because of its price, more than $700 a month for a supply of the twice-a-day pills. The drug is a combination of two low-cost ingredients — an over-the-counter cough medicine and a generic heart drug — that, purchased separately, would run roughly $20 a month based on online cost estimators. To be sure, the comparison is apples to oranges because the dosage of the heart drug is so much lower in Nuedexta than is generally available on its own by prescription. Experts say a do-it-yourself treatment would be difficult and potentially dangerous for a consumer to try to concoct. “You’d have to get the exact doses right, and that would be tricky,” said Dr. Aiesha Ahmed, a neurologist at Penn State Hershey Medical Center who has researched the prevalence of PBA and its treatment options.

The pill doesn’t cure PBA but must be taken for the rest of a patient’s life to help reduce the laughing or crying episodes. While it’s the only Food and Drug Administration-approved drug specifically for PBA, doctors have successfully treated the condition with several alternatives costing far less — all antidepressants.

“The cost for mixing two old drugs together is unconscionable,” said Jerry Avorn, professor of medicine at Harvard Medical School and chief of the Division of Pharmacoepidemiology and Pharmacoeconomics at Brigham and Women’s Hospital.

The strategic marketing of Nuedexta is part of a broader trend in which even small pharmaceutical firms turn to high-cost airwaves to encourage use of their products. Pharmaceutical industry spending on DTC television ads has been on the rise — up 62 percent since 2012 to an estimated $6.4 billion in 2016 — even as TV advertising for other product types stayed flat, according to Kantar Media, a consulting firm that tracks multimedia advertising. By last year, drug ads were the sixth-most-common category of television advertisement — behind such things as cars and restaurants — up from 12th just five years ago.

Drugmakers defend the slew of advertisements as educating patients who may not understand they have a disease or that their symptoms can be treated. The uncontrolled laughing or crying of PBA “is quite debilitating,” and Nuedexta provides substantial relief for many, said Avanir’s chief medical officer, Rick Malamut, a neurologist who recently joined the company.

Avanir declined to say how much it is spending to market Nuedexta. In justifying the price, Malamut said the company had invested hundreds of millions of dollars over 10 years on research before winning FDA approval in late 2010. More is now being spent to research whether it — or other Avanir products — could help with other neurological conditions.

“We understand the cost of medication is burdensome for people without [insurance] coverage,” he said, noting the company offers financial assistance to help such patients.

Some experts say the cost isn’t worth it: “If it were your loved one, there would probably be a value to prevent these episodes,” said Mark Pauly, a health economist at the Wharton School of the University of Pennsylvania, of the bouts of laughter and crying. But, he added: “As a hardhearted economist, I have to ask if it’s worth $700 a month.”

Still, the market has proved lucrative. Nuedexta’s sales have risen from about $37 million in 2012 to $218 million last year, according to EvaluatePharma, which tracks pharmaceutical industry pricing and markets.

Continued on next page