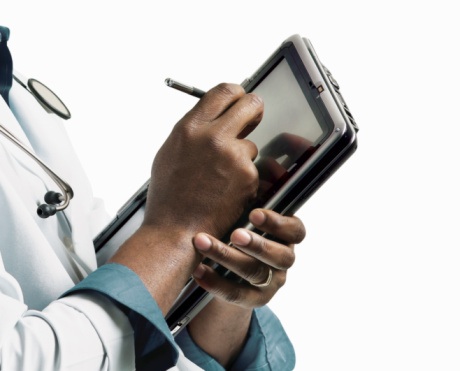 Doctors who rely heavily on computers while in the exam room may run the risk of harming their relationships with their patients, a new study suggests.

Patients are less likely to rate their care as excellent when clinicians spend a lot of time on the computer when they are seeing a patient, said study author Dr. Neda Ratanawongsa. She is an associate professor at the University of California, San Francisco (UCSF), School of Medicine.

The study authors think patients might feel slighted if their doctor spends more time focused on a computer screen than looking over their ailments or listening to their concerns.

“It may be that they aren’t getting the attention or connecting with their provider in a way that they used to, or that they still do with other providers,” Ratanawongsa said.

Federal health care reform has placed great emphasis on the use of electronic health records, making computers a “third wheel in the exam room” that’s “been insinuated into the doctor-patient relationship,” said Dr. Wanda Filer, president of the American Academy of Family Physicians.

Doctors frequently spend much of an office visit at the keyboard, inputting information into a health record rather than giving the patient a once-over, said Filer, who is a family physician in York, Penn.

“We’ve taken this technology and we’ve embraced it, but I think a lot of us don’t believe it’s ready for prime-time,” she said. “We’ve got this interloper in the exam room, but it’s not there to help with the medical side as much as it’s there to check boxes for insurers.”

The two-year UCSF study involved 71 encounters among 47 patients and 39 clinicians at a safety net clinic, which serves people with less access to health care.

About 83 percent of patients whose doctors barely bothered with the computer rated their care as excellent in follow-up surveys, the study showed.

On the other hand, only 48 percent of patients whose doctors engaged in heavy computer use felt they’d received excellent care, according to the research published online Nov. 30 in the journal JAMA Internal Medicine.

Doctors who spend a lot of time looking at the computer may not be as focused on their patient and can miss crucial information provided during the encounter, Ratanawongsa said.

“If you’re not paying attention to a person, you can miss very important cues, especially nonverbal cues like the expression on their face or their body language,” she said.

That could be more of a problem at safety-net clinics, where patients are less likely to understand basic health information and more likely to face a language barrier, said Richard Frankel, a professor at the Indiana University School of Medicine, in Indianapolis.

“One way of knowing if a person is following along and understanding what you’re saying is by observing their nonverbal behavior,” said Frankel, who wrote an editorial that accompanied the study.

As federal requirements for electronic health records increase, the demands they place on doctors will increase, Ratanawongsa added. “If anything, things will intensify with the new records,” she said.

Filer said she makes a point of not using the computer during an examination. “I prefer to come back and document at a nurse’s station, and dedicate my time in the exam room to the patient,” she explained.

But Frankel said that approach might be counter-productive. “We know the most accurate and complete information is obtained at the point of care, rather than an hour later or a day later,” he said.

To help keep their focus on the patient, doctors might consider bringing a scribe into the exam room to take notes during the office visit, Ratanawongsa said.

Doctors also might turn the computer screen so that the patient can see it as well, Frankel said. That way, the computer could become a tool that helps a physician educate their patient on their own health status. Patients looking over a doctor’s shoulder also might be able to catch any errors or typos in their health record.

Patients who feel they’re being ignored thanks to the computer should say something to their doctor, Frankel added. “If you don’t speak up, the behavior will never get corrected,” he said.

Finally, Filer believes that more pressure needs to be placed on federal officials and computer software vendors, to make electronic health records more of a help than a hindrance in the exam room.

“We need the next generation of electronic health records, and we need them to be designed so they’re a tool and not a means to an end,” she said. “It needs to be a support, and not a hindrance, to the doctor-patient relationship.”

For more on electronic health records, visit the U.S. Department of Health and Human Services. Copyright © 2015 HealthDay. All rights reserved.