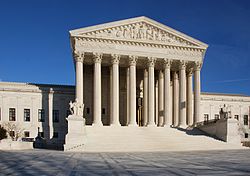 In a 5-4 decision, the Supreme Court of the United States today served a blow to President Obama’s Affordable Care Act as it ruled that the so-called “contraceptive mandate” violates the religious freedom of business owners.  Bottom line: The government can not force companies to cover contraceptives for women.

The court tried to narrow its decision only to apply to contraceptives.  Justice Samuel Alito wrote in the opinion that “this decision concerns only the contraceptive mandate and should not be understood to hold that all insurance-coverage mandates, e.g., for vaccinations or blood transfusions, must necessarily fall if they conflict with an employer’s religious beliefs.”

However, critics of the decision were quick to note that, regardless of the Court’s qualifiers, this ruling does open the door for other plaintiffs to make that exact complaint — to claim that due to their religious beliefs, they really should not have to cover blood transfusions either.

“The potential effects of this decision are absolutely chilling, setting a precedent that is sure to reverberate far beyond the issue of contraceptive coverage,” said Ronald A. Lindsay, President and CEO of the Center for Inquiry. “This is not a decision that advances religious freedom – it is a decision that enshrines religious privilege over and above employee well-being,” added Lindsay. “This decision defies common sense, lacks compassion, and has the potential to harm us all.”

As for the women affected by this decision, Alito said “there are other ways in which Congress or HHS could equally ensure that every woman has cost-free access to the particular contraceptives at issue here and, indeed, to all FDA-approved contraceptives.”

The medical community was not very supportive of the decision. “The Supreme Court’s decision allowing companies to deny coverage for important health services sets a precedent that threatens the nation’s health,” said American Academy of Family Physicians president Reid Blackwelder, MD. “With this decision, the court has moved health care decisions out of the exam room where patients can consult with their physicians — and where such decisions should be made — and put them into the hands of business owners who base decisions on personal beliefs rather than medical science.”

“Personal or institutional beliefs should not put Americans’ health and lives at risk, simply because employers control the insurance available to their workers,” said Dr. Blackwelder. “Unfortunately, the Supreme Court decision opens the gate for just such consequences.”