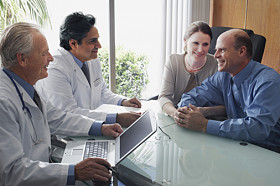 In a cautionary reply to a new medical society report embracing accountable care organizations (ACOs) and bundled payment – two key reforms embedded in the Affordable Care Act – a team of prominent health researchers charge that history is about to repeat itself, to the detriment of both patients and physicians.

Writing in this week’s Journal of General Internal Medicine, Himmelstein and Woolhandler say both physicians and patients have bad memories of health maintenance organizations, or HMOs, which proliferated in the late 1970s and early 1980s. HMOs were associated with frequent denials of care, restrictive networks of providers, and increased financial “risk-sharing.”

Such HMO practices, which are resurfacing in the context of today’s ACOs, had the effect of limiting patient choice and pressuring physicians to withhold care and avoid unprofitably ill patients, such as those with mental illnesses.

The payment reforms of that period, including bundled payment and capitation, amounted to a scheme of “fee-for-NON-service,” they say. The cumulative effect of all these changes was to swell the profits of the privately owned HMOs.

The HMO model, touted as a cost-saving strategy (as are today’s ACOs), was sometimes associated with flagrant abuses, including “horrifying tales of office celebrations triggered when reviewers discovered loopholes allowing the denial of transplants.”

Although supporters of today’s ACO model assert that the new structures will have safeguards against the cherry-picking healthy patients and care denials that characterized HMOs, the authors write that the early HMO proponents made virtually identical promises.

Moreover, just like HMOs, ACOs will be highly susceptible to “gaming,” e.g. overdiagnosing and “upcoding” of medical conditions to make patients look sicker on paper so as to garner higher payments for care. Experience has shown that providers who initially refrain from such practices are ultimately forced to do so in order to compete and survive, they write.

Nor is there evidence that the gamut of cost-saving mechanisms championed by today’s ACO advocates, including pay-for-performance schemes, will save money.

Himmelstein and Woolhandler note that giant corporations will have a competitive edge in the reshaped, post-ACA health care landscape, based on their clout and the size of their market share, and that “a system dominated by profit-maximizing oligopolies is a perilous route to savings.”

In contrast, countries that have adopted a universal system of care with regulations that restrain costs and minimize opportunities for profit have achieved better outcomes, lower costs and fairer compensation of physicians.

“Payment reform should focus not on manipulating greed but on dampening it,” they write.

Himmelstein and Woolhandler are professors of public health at the City University of New York, lecturers in medicine at Harvard Medical School, and co-founders of Physicians for a National Health Program. Physicians for a National Health Program is a nonprofit research and educational organization of more than 18,000 doctors who support single-payer national health insurance. PNHP had no role in funding or otherwise supporting the article described above.