Breaking News
Home / Patients News / Brain in a Jar: When the Past is Prologue

Brain in a Jar: When the Past is Prologue 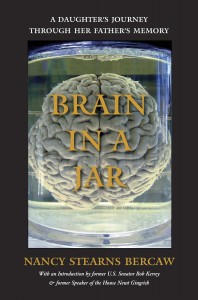 It is December 27, 2010, my birthday. I am forty-five. I call my father at Juniper Memory Care because I know he won’t remember to call me. My heart longs to hear him sing “Happy Birthday and to say, “Your ol’ dad sure loves you.”

One of the Haitian aides in his cottage retrieves my father for me. I can hear him fumble with the phone—an apparatus he never much cared for in the first place.

Final proof, as if needed, that Beau should be where he is. Never, ever, ever would he have said that to me if plaque weren’t clogging up his brain.

“Is there anything you need?”

What he needs is for me to kill him. After all, he’d made me swear on the family Bible that I would put a gun to his head if he showed any signs of getting what his father had. But I won’t do it. I would rather kill myself.

He doesn’t say in the third person like he used to, which used to make me so angry. Why can’t you say, I love you?

But now I’d rather have his mind back than his first-person love. I miss the complexity that defined my life with Dr. Beauregard Lee Bercaw—a man who became a neurologist after watching his father die of AD. And then kept his father’s atrophied brain in a jar on his office desk.

I picture Beau lying in his bed at Juniper most of the day, staring at the ceiling fan. He gets up for meals, or if he is asked to go to the men’s club meeting. He only does these things because he is a gentleman. He thinks meetings are stupid. Meals are worthy, though, especially if rice or fish are involved.

I ask Beau if they serve fish at Juniper.

“You are sending a fish?” he asks, confused.
“No, I am wondering if they feed you fish.”

I am talking to Beau as if he is an Orca “killer” whale at SeaWorld and I was his trainer:  Show me what you’ve learned, and I’ll reward you! Meanwhile, you can swim in circles with your dorsal fin flopped over indicating your unhappiness, and your audience will pretend it means nothing. The flopped fin, your misery, is just the price of conserving the breed.

I am not sending Beau fish, but I will send him Butter Rum Life Savers. Maybe the Life Savers will have the opposite effect. Perhaps he will choke on one and die. What we need now is Life Enders. I laugh at my absurd thought process, and then I start crying.

I hear him put the phone on the counter instead of on the hook. I hear one of the aides tell him that a football game is on TV before she hangs up the phone.

Two weeks before Beau moved into Juniper, his neurologist, Dr. Matthew Baker, brought up the subject of next steps. It was the first time Beau had actually been confronted, face-to-face, about his memory loss.

“Dr. Bercaw, what do you think is next for you?” Dr. Baker said.

Nora told me that Beau looked puzzled, as if he had been asked a riddle.

“Where do you think you should live?” Dr. Baker pushed.

“Home?” Beau might have been wondering if this was some sort new series of questions designed to assess a patient’s neurological function.

“Dr. Bercaw, you have Alzheimer’s and need special care now. I think you and Nora need to talk about this.”

Beau went pale. He cried all the way home, asking Nora repeatedly, “Do you think I have Alzheimer’s?”

By the late afternoon, thank God, he had forgotten what Dr. Baker had said.

I am secretly hoping Beau doesn’t really have Alzheimer’s disease. Maybe what he has is Bercaw’s disease, in which eccentricity reaches such a degree that a Bercaw can no longer function in a non-Bercaw world. It might look like brain atrophy on an MRI, but it really means that the afflicted Bercaw is shrinking into himself.

It is happening to me, too. I can’t remember a lot of stuff—and I don’t know if it’s because I am grieving over my father or if I’m in the early stages of Bercaw’s disease. I am talking less. I’m sleeping more. These things are happening to me in the same way other people go bald.

(Excerpted from “Brain in a Jar: A Daughter’s Journey Through Her Father’s Memory” with the author’s permission. Broadstone Books, April 2013. The book can be pre-ordered through BroadstoneMedia@aol.com.)