Health Plans Gear Up To Sell Directly To Consumers

As the health care overhaul moves ahead, the nation’s health insurers are scrambling to reinvent themselves, hoping to boost their image and entice millions of Americans to enroll, some for the first time.

The new customers will mostly shop for and buy their own insurance — a different and harder-to-reach group than the industry’s traditional employer clients. So insurers are seeking novel ways to reach them — online, in shopping centers, even when they’re preparing their taxes.

Blue Shield of California has opened a center inside Lucky Supermarket in San Francisco, offering wellness visits and consultations with a company “ambassador,” who can answer questions and sign up people for coverage while they buy fruits and vegetables. Blues plans in Florida, Pennsylvania and three other states have also opened store-front sales centers. 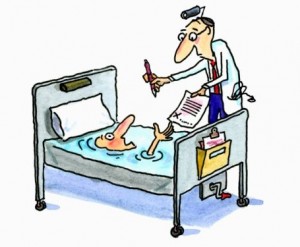 Customers going to H&R Block this tax season will be asked if they want to learn about health insurance options, part of a partnership with Blue Cross Blue Shield expected to expand to as many as 40 states by next spring.

And some patients will find their urgent care centers and doctors’ practices are now owned by insurers whose names may be emblazoned above the door.

All this is happening in anticipation that an estimated 9 million people will buy their own insurance in 2014 — about 50 percent more than do so now. That’s when the law goes into full effect and virtually all Americans will be required to have health insurance. Those not covered through their jobs will be able to buy policies online, through so-called exchanges that will be run by the states or the federal government.

These new consumers are expected to shop for health insurance the same way they do for a computer or a car — seeking out a trusted brand.

Ana Gupte, a managed care analyst for Sanford C. Bernstein & Co., says cultivating brand identity is part of the new strategy. “You have a Humana plan and see a Humana doctor and go to a Humana store in a strip mall,” she says.

The law shakes up the industry’s old business model by removing one of the key ways it currently limits financial risk: rejecting individual applicants with health conditions. Instead, starting in 2014, insurers can’t reject anyone, or charge more based on health history. They can, however, vary rates based on age, tobacco use and where applicants live.

At the same time, most Americans will be required to carry insurance — or face a fine — and federal subsidies will be available to help some do so. It is uncertain whether the subsidies and fines will be enough to entice younger and healthier people to buy insurance, seen as necessary to spread costs and help slow premium growth.

“This is a revolution in health insurance regulation: Insurers in the non-group market will have to play by new rules,” says health policy expert Jonathan Oberlander at the University of North Carolina-Chapel Hill.

While the vast majority of people — currently about 170 million — will continue to get insurance through their jobs, the individual market represents “real income for the health industry and it will move fast in the next few months to target that group,” says Ceci Connolly, managing director of PwC’s Health Research Institute.

Compared with the traditional business of selling coverage to employers, the individual market is “high-risk and has been seen as more of a nuisance” than a great business opportunity in the past, says Robert Laszewski, a former industry executive-turned-consultant.

Still, insurers “believe they have to participate,” because millions of Americans are likely to move in and out of that market after 2014, he says.

Insurers are ramping up marketing efforts, readying themselves both for the influx of individual purchasers and the expected growth of state Medicaid programs. In addition to the subsidies to individuals, the federal health law also expands eligibility for Medicaid to more low-income Americans, adding as many as 17 million people to the rolls if the law is fully implemented in all 50 states. Most states contract Medicaid coverage to private insurers.

Between the Medicaid expansion and the new focus on individuals, “You’re going to see a lot more direct-to-consumer advertising,” predicts Gupte.

While no one knows for sure exactly who or how many will enroll in these policies, a PwC report projects that the newly insured will be slightly younger, less educated and less well-off than those currently insured.

“These will be people who are very new to the whole experience of health insurance coverage,” Connolly says.

As a result, one of the first challenges for insurers — and the states setting up new marketplaces where they will shop — will be educating potential customers that the online markets exist and that subsidies may be available to help defray the cost of coverage. Such efforts are likely to target people “where they are,” including on buses, subways, social-media sites, malls and sporting events, says Laszsewski.

Insurers are already developing advertising that appeals to younger Americans and trying to simplify paperwork, roll out smartphone apps and make it easier to contact medical staff by e-mail.

Such changes “will raise satisfaction and the regard of the health industry and insurers in consumers’ eyes,” says Maureen Sullivan, chief strategy officer for the Blue Cross and Blue Shield Association.

Gupte says policies aimed at individuals and Medicaid beneficiaries will look a bit different than those commonly sold to employer groups. They will feature smaller networks of doctors and hospitals, more like the health maintenance organizations (HMOs) of the 1980s than the open-model plans favored by workers enrolled in job-based insurance coverage.

Coverage sold through the exchanges must also fall into one of five standardized options: Bronze, Silver, Gold, Platinum or Young Adult, so consumers can easily compare them. Premiums for the plans will vary. Besides ramping up their marketing efforts, insurers are also having to figure out how much to charge for new policies, which will go into effect Jan. 1, 2014. But it’s tricky: If they set premiums too high, insurers could drive business to competitors.

Low prices could spell a big financial loss. Insurers must submit their prices to state and federal regulators soon, well before anyone knows how successful enrollment efforts will prove and whether the new enrollees will be healthier or sicker than those currently insured.

“Our actuaries have said this is the single-most-challenging and problematic pricing decision they have ever had to make in their careers,” says Kaiser Permanente CEO George Halvorson.

The uncertainty also extends to whether the new marketplaces will be ready on opening day. Many states had waited for the outcome of the presidential election to decide whether to set them up — and may now be out of time. A federal backup exchange is expected to be put in place in states that don’t take action.

The penalties for not carrying coverage are also likely to affect enrollment. Policy experts question whether penalties are too low — as little as $95 the first year — to spur some to buy coverage.

With the “cloud of uncertainty” over the law’s future lifted, discussion will turn to “how to make coverage more affordable,” says Phil Blando, a consultant whose clients include insurers. “They’ve regulated insurers pretty tightly in this law. As cost pressures mount, where will lawmakers go to address that?”