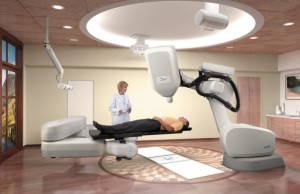 Jim Beck*, a 66-year-old farmer, was found to have a prostate-specific antigen (PSA) of 7.4 ng/ml on routine screening and resulting biopsies showed prostate cancer with a Gleason score of 3+3. The prostate was mildly diffusely enlarged, but without discrete nodules. Mr. Beck, whose cancer falls into the low-risk category, was presented with several treatment choices, but found most of them unappealing. Radical prostatectomy has a fair chance of causing impotence and at least temporary incontinence. Insertion of permanent or temporary radioactive pellets (also known as low-dose rate brachytherapy and high-dose rate brachytherapy, respectively) are invasive and require anesthesia and recovery time. External radiation using intensity modulated radiotherapy (IMRT) is non-invasive, but requires daily treatments in the radiation department for eight weeks. All methods involving radiation have potential long-term rectal and urinary effects. Mr. Beck wanted to avoid a surgical procedure, and did not want to spend weeks driving to the cancer center for his daily radiation. So when his doctors mentioned radiosurgery, he was more than interested.

Radiosurgery, contrary to what the name suggests, does not involve any cutting and is not a surgical procedure. There are several commercially available radiosurgery systems. CyberKnife® Robotic Radiosurgery System is the world’s only robotic radiosurgery system designed to treat tumors anywhere in the body—including the prostate—non-invasively. An X-ray-producing linear accelerator is mounted on a robotic arm with tight motion control. Radiation is delivered from hundreds of different spatial angles with submillimeter accuracy. Targeting with the CyberKnife System relies on preimplanted fiducial markers, which are detected by kilovoltage X-ray diagnostic units mounted on the walls of the treatment room.

In the case of prostate cancer, the markers are inserted, either transrectally or transperineally, during an office visit under ultrasound guidance. A CT scan and an MRI scan for planning purposes are obtained several days later. The treatment itself consists of four or five radiation fractions given on different days. Each treatment lasts about an hour and, like other external radiation treatments, patients do not feel anything. Patients report minimal to no side effects and get back to normal life, including work and family activities, immediately after treatment (this is not to say that there are no aftereffects, as will be discussed later).

The unique feature of CyberKnife Radiosurgery is that it is capable of tracking target motion. The imaging system built into the treatment room takes periodic images of the patient during the treatment, detects the position of the preimplanted fiducial markers, and if the prostate is found to have moved the system accommodates for that change by moving the robot to ensure that the radiation beam is fixed on the prostate. The patient table is not moved during the treatment and the treatment typically does not have to be interrupted to accommodate shifts in the position of the prostate. This is important, because during the hour-long radiation delivery, the activity of the bladder or rectum may push prostate away from the original position. This feature helps deliver high-dose radiation with pin-point precision, which minimizes damage to surrounding healthy tissue and reduces the risk of such side effects.

Traditional radiation, including newer IMRT technology, relies on splitting the total amount of radiation into multiple small fractions delivered on consecutive days for as long as eight weeks, in order to avoid injury to normal tissues. However, some experimental data and clinical observations indicate that prostate cancer may be more sensitive to radiation given in few but larger radiation doses. This is to some degree borne out by the results of prostate high-dose rate (HDR) brachytherapy. In HDR brachytherapy, metal hollow catheters are inserted through the perineum into the prostate. The catheters are loaded with removable radiation sources typically twice a day, for a total of four treatments over half as many days. HDR brachytherapy was never compared with other treatments in a phase III clinical trial, and retrospective outcome data mostly do not reach beyond five years of follow-up. However, the published experience indicates that at least within that time period, the results are comparable to standard therapy.

Radiosurgery and HDR brachytherapy are similar in biology, because both give large radiation doses in few fractions. The dosimetry, or the pattern and level of radiation delivered to the prostate, of CyberKnife Radiosurgery can be made to emulate that of HDR brachytherapy. However, studies of CyberKnife Radiosurgery have even shorter follow-up. The most mature follow-up data was published by Stanford University. The interim report describes 41 patients with median follow-up of 33 months, all of whom have obtained biochemical control of their disease and had mild side effects. None relapsed during the follow-up. Several other centers in the country have treated a large number of patients and reported their data. However, none have follow-up long enough to make any conclusion other than the PSA response is seen in the vast majority of patients, and early side effects are comparable to what is typically reported with standard fractionated radiotherapy. Prostate cancer tends to be a slowly progressing disease and years of follow-up are needed to assess treatment efficacy. Furthermore, it is known that late rectal and urinary complications from radiotherapy continue to develop up to five years after the treatment.

Despite that, patients find the prospect of five non-invasive treatments very appealing, and physicians like the precision and conformality of the radiation dose to the prostate gland. John J. Dombrowsky, M.D., of St. Louis University receives his CyberKnife referrals mostly from their institution’s multidisciplinary prostate clinic, but quite a few patients are self-referred. He believes that CyberKnife offers better sparing of rectum and bladder, and that the PSA response is seen faster than after standard radiation. In his CyberKnife facility, all prostate patients are enrolled on a phase II study. Two such studies are sponsored by Accuray, the company that manufactures CyberKnife equipment. Any CyberKnife facility within the United States can participate in one of those studies provided they meet stringent technical criteria, and many do participate. Additional phase II studies are being conducted by some other institutions with high patient volumes.

Dr. Dombrowski is able to offer CyberKnife treatment to his patients because the Medicare regional contractor for the state of Missouri covers it. Currently, Medicare covers the procedure in 36 states. However, Medicare regional contractors Trailblazer Health and Noridian Administrative Services have declined coverage, citing insufficient evidence about efficacy and safety. The states affected include Alaska, Arizona, Colorado, Montana, New Mexico, North Dakota, Oklahoma,  Oregon, South Dakota, Texas, Utah, Virginia, Washington and Wyoming. Palmetto GBA, covering California, Nevada and Hawaii, recently reversed its decision not to cover CyberKnife for prostate cancer, but with a qualifier that it will cover only treatment on a clinical trial or patients ineligible for other treatment options. On the other hand, First Coast Service Options covering Florida, which has been covering CyberKnife for prostate cancer, is considering stopping this coverage. The company states that CyberKnife treatment has no outcome advantage over standard radiation demonstrated in the literature. The critics point out that some of the carriers which are refusing to cover CyberKnife will pay for proton therapy for prostate cancer, although there is likewise lack of phase III data showing superiority over standard treatment.

Notwithstanding the controversies, many patients and physicians feel that CyberKnife is an excellent treatment option for early stage prostate cancer, because of the short and simple schedule and non-invasiveness. Hopefully, the ongoing clinical studies will identify the population of patients for whom CyberKnife Radiosurgery is the optimal treatment. Until then, it is hoped that the carriers will cover the procedure at least on a clinical study basis.

Dr. Nena Mirkovic, M.D. is a graduate of the University of Zagreb in Croatia. She has been practicing radiation oncology for nine years and was on faculty at Loyola University Stritch School of Medicine before joining START Center for Cancer Care in San Antonio, Texas (www.startthecure.com).