Breaking News
Home / Headlines / Will I Always Face The Threat Of A Peanut-Laden Kiss Of Death?

Will I Always Face The Threat Of A Peanut-Laden Kiss Of Death?

Whenever I see a report touting possible new peanut allergy treatments, I devour it. I can’t help it. It’s an occupational hazard for any health journalist whose reporting specialty and medical history intertwine.

I write about the business of health care, focusing on how consumers interact with the system — what we pay, what we get and why American care costs so much. But in this particular instance, I have another kind of authority: 26 years of life-threatening allergies to nuts and peanuts.

So last month, when California-based Aimmune Therapeutics sparked optimistic headlines after releasing clinical trial results that its allergy product, AR101, would reduce the risks linked to an accidental exposure to peanuts, I received the usual wave of questions from friends, co-workers and my parents: Would you try it? Could this help?

Aimmune is just one company eyeing the prize. Childhood peanut allergy diagnoses increased more than 20 percent in the United States from 2010 to 2017. The global market for relief is worth as much as $2 billion. The French drugmaker DBV Technologies is also working to commercialize a peanut allergy patch. Other companies, including industry giant Sanofi, are following their lead.

If any one of them succeeds, it could change my life.

My friends call nuts “Shefali poison.” My allergies first surfaced when, as a 15-month-old, I picked Thai noodles off an aunt’s plate and developed hives on my face, and then a few months later when I tasted my mom’s kaju barfi – an Indian dessert with cashews – and ended up in the hospital. Nobody in my family had ever heard of peanut allergies.

I’ve carried epinephrine since I was 7 years old. My friends are trained to inject it in my leg, the standard procedure for an emergency allergen exposure. though I luckily haven’t had to take a shot of it since I was 4. (Another child in my Montessori class had a peanut butter sandwich for lunch.)

My mom also recalls another incident when she had to pick me up early from day care because the class was making peanut butter bird feeders. And I spent too many years of pre-adolescence eating lunch at the designated “peanut-free table.” Now, I can only dream of flying to visit my parents for Christmas without worrying about whether my seatmate’s snacks might induce anaphylaxis. And yes, kissing someonewho has just eaten peanut butter would put my life in danger.

But are these pills and patches a true breakthrough for people like me?

I approached the question as I would any other assignment. I read the research, called immunologists, and spoke with economists and drug pricing experts about whether these treatments offer meaningful benefit.

One of the first things I heard: “We are still in the infancy of these treatments,” said Dr. Corinne Keet, a pediatric allergist at Johns Hopkins University. Shefali Luthra (second from right), pictured in the seventh grade with her school math team, carried epinephrine in a fanny pack as a child, in case she had an allergic reaction. (The fanny pack, thankfully, has since been replaced with a purse.)

Medically, there’s a lot we don’t know about the risks, how much these drugs could help and how long any effects would last.

“None of these treatments have been shown to prevent fatal reaction,” Keet emphasized.

The idea behind them is to desensitize people. Aimmune’s “peanut pill” is modeled on the oral therapies some specialists use to wean allergic kids back on to nuts. This approach has gained popularity in recent years, especially for children with multiple allergies, or when it’s a substance particularly hard to avoid.

A colleague’s young daughter, who was born with multiple allergies, used that very treatment, as did a younger cousin of mine who, for the first several years of her life, was allergic to — not joking — almost everything but fruits and vegetables. In my case, this therapy came into vogue after I was too old to have a good chance of it weakening my sensitivities.

How it works: Kids ingest tiny, escalating doses of peanut protein. They then stay on peanut protein — Aimmune recommends the pill, though other doctors I spoke to suggested a little bit of peanut — as a maintenance drug.

But it’s unclear how much the new therapies would improve upon that ad hoc oral immunotherapy allergists are already offering. Instead of drugs, they use store-bought peanut protein, usually de-fatted peanut flour available online for as little as $1 a pound. This method isn’t approved by the Food and Drug Administration, and often isn’t covered by insurance — though doctors’ visits can be billed as “food challenges” or other visits that are typically covered.[khn_slabs slabs=”790331″ view=”inline”]

In contrast, Aimmune’s product is expected to cost between $5,000 and $10,000 for the first six months of use, and $300 to $400 per month after. Analysts predictDBV’s will cost more than $6,000 for a year’s supply, though the company says it has not yet determined a price. DBV, Aimmune’s chief rival, has come up with a wearable skin patch that would transmit tiny, desensitizing protein doses. It declined to estimate a price, but it does not view oral immunotherapy as a competitor, said Joseph Becker, a company spokesman.

“There’s excitement, there’s caution and a lot of unanswered questions,” warned Dr. Erwin Gelfand, a pediatrics and immunology professor at the University of Colorado.

According to Aimmune’s results, published in the prestigious New England Journal of Medicine, two-thirds of allergic children could ingest 600 milligrams of peanut without harm after going through treatment.

To be clear, even with Aimmune’s help, someone like me still couldn’t safely eat PB&J. But it would desensitize me enough that I could taste a friend’s wine even if he recently ate pad thai.

Still, the treatment comes with caveats.

While 496 children started the trial, only 372 completed it. Of the 20 percent who backed out, half did so because of adverse events. About 14 percent of kids getting treatment still had to take epinephrine, and one experienced anaphylaxis, a severe reaction that can involve rashes, vomiting, a tightening throat and difficulty breathing. (For an allergic kid, even the possibility is maybe one of the most terrifying things you can imagine.)

Children who completed the regimen still had to take small doses of peanut protein daily, either the Aimmune drug or a controlled peanut serving. Statistically significant benefits were clear only in patients through age 17, though Dr. Daniel Adelman, the company’s chief medical officer, said Aimmune plans to do a follow-up trial for adults.

And the results don’t indicate who is likely to benefit, or how long improvements would last. That’s impossible to know, Adelman said, though he suggested accidental peanut exposure is scary enough — and pure avoidance ineffective enough — that the treatment is still worth it.

But all this means that anyone who has gone through Aimmune’s regimen would still want to carry epinephrine, and try to avoid peanuts.

“Not everybody responds well,” Gelfand said. When you factor in those details, the results are “not all that impressive,” he argued.

Dr. Tina Sindher, a pediatric allergist at Stanford University, pointed out that the Aimmune pill is a repackaged, clinically tested version of that homegrown oral therapy many allergists have already been using. DBV’s peanut patch, Viaskin, to a lesser extent, is the same — more convenient, perhaps, and more regulated, but still a variation on the existing medical approach.

“This concept has been around for a long time,” she said.

What’s new is the addition of labor, standardization and federal oversight — which companies then say demonstrates increased value.

It highlights a pattern I’ve noticed from my reporting: Drugmakers develop medication that refines a low-tech remedy, run a clinical trial to secure FDA approval, and then sell it at a higher price. For pharma, it’s a logical way to profit. But it puts patients in a bind.

“The hard outcome is we have these new products and they’re just about as good or slightly better than what we have,” said Nicholson Price, an assistant professor at the University of Michigan Law School, who studies drug pricing. “And they’re a lot more expensive.” He noted: “That’s when the choices get hard, and we’re not good at making hard choices.”

Also skeptical? The closest authority I know: my mother, who raised me with peanut allergies when they were more or less unheard of, and is now doing it all over again for my 10-year-old brother. (My other brother, my twin, was allergy-free until about a year ago.)

“It’s not worth it,” my mom told me. Her concern? Getting any of us to maintain a peanut dose — without knowing how long that reduced sensitivity would last — could induce what she called “a false sense of security.”

This thinking isn’t out of line, Sindher suggested. The way these studies are touted, she said, often “gloss over the fact that there’s a lot we don’t know.”

So for now, I’ll have to maintain my distance from the newsroom stash of Reese’s Pieces. My epinephrine and I aren’t parting ways anytime soon. 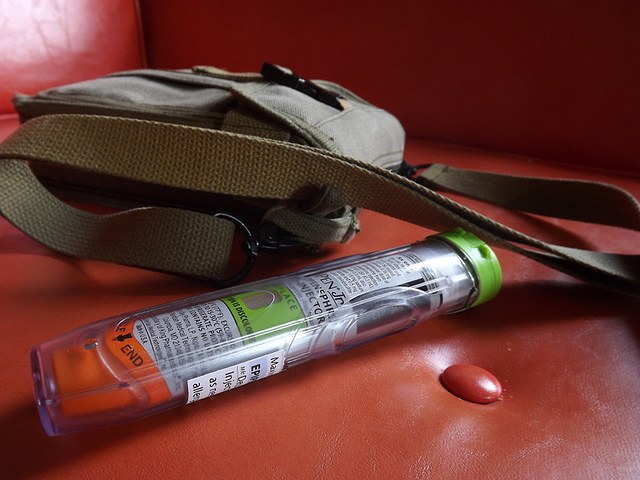