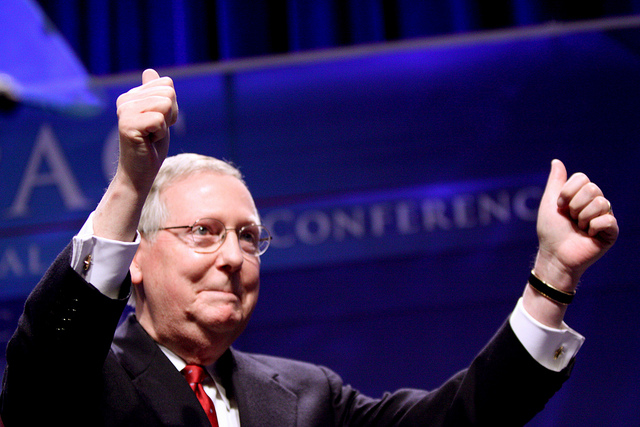 Senate Republican leaders Thursday released their revised bill to “repeal and replace” the Affordable Care Act, but they acknowledged that furious days of negotiation have not yet secured the 50 votes necessary to pass the measure over unanimous Democratic objections.

Sen. John Cornyn (R-Texas) the No. 2 GOP leader, told reporters that while backers of the measure did not yet have the GOP votes needed, “we will by the time we vote.”

The revised draft was presented to Republican senators at a closed meeting Thursday morning. Among its many provisions, it would cap federal funding for the Medicaid program, which covers more than 70 million low-income Americans, and give states authority to waive insurance regulations in the ACA.

Senate Majority Leader Mitch McConnell (R-Ky.) has been struggling for more than two weeks to satisfy holdouts from both wings of the party. Conservatives complain that the draft bill unveiled last month did not go far enough to repeal many of the ACA’s regulations, while moderates argue that structural changes and cuts to the Medicaid program for the poor are too deep.

So far, two of the 52 Republican senators have declared they will not even vote for the preliminary motion that would begin formal debate: conservative Rand Paul of Kentucky and moderate Susan Collins of Maine. “Still deep cuts to Medicaid,” Collins tweeted. “Will vote no on” motion to proceed to the bill.

Collins told reporters separately that she cannot support the bill, and criticized Senate leaders for the way they produced it. Such a fundamental change to Medicaid should have a full set of legislative hearings, she explained. Even fully repealing the ACA would not cap spending for Medicaid in the way the Senate bill is proposing. “Repealing Obamcare would not change the underlying Medicaid program,” she said.

The ACA expanded Medicaid, but the Senate changes would cut it back well beyond that expansion.

One more “no” vote would stop the bill in its tracks, even with a potential tie-breaking vote from Vice President Mike Pence. Several moderate senators emerged from the closed meeting saying they were still undecided, including Shelley Moore Capito (R-W.Va.) and Lisa Murkowski (R-Alaska).

Leaders did, however, apparently satisfy some of their more conservative members by making some changes proposed by Ted Cruz (R-Texas). Cruz touted after the meeting that the legislation includes provisions to allow people to use tax-preferred health savings accounts to pay insurance premiums (which are currently banned). It would also allow anyone to purchase a plan that covers only catastrophic health expenses (which the ACA limits to those under age 30) and permit insurers to offer plans that do not conform to many of the regulations in current law. Those rules include the ACA’s requirements for coverage of specific health benefits as well as bans on insurers charging sick people more and limiting out-of-pocket costs.

Senate leaders offered to spend more money on people who could be adversely affected by the insurance changes, including an additional $45 billion to combat opioid abuse, but moderates said it does not solve the problem.

“There’s money,” Collins told reporters, “but too many uses for that money.”

Democrats remained steadfastly opposed to the measure. “The meat of this bill is exactly the same as it was before, and in some ways, they’ve somehow managed to make it even worse,” said Minority Leader Chuck Schumer (D-N.Y.).

Even if leaders round up the needed votes, there are still a number of obstacles between this draft bill and President Donald Trump’s signature. They include:

Republicans are trying to pass their health bill using a special budget process that lets them avoid a filibuster and the usual requirement to get 60 votes for passage. But strict rules govern what can and cannot be included in such a “budget reconciliation” bill. Democrats this week are arguing to the Senate parliamentarian that many sections of the bill should not be allowed, including those that would impose abortion restrictions and modify the private insurance regulations included in the ACA.

The Congressional Budget Office is the official scorekeeper for Congress. It said the first version of the Senate bill would result in 22 million more uninsured people by 2026.

CBO is expected to offer its score of the bill next week, but some Senate Republicans on Thursday said that rather than wait for that, they might ask the Department of Health and Human Services to do it instead. That would be likely to produce a number more favorable to Republicans.

Democrats saw that option as a partisan play by Republicans. “It’s gaming the score,” said Sen. Sherrod Brown (D-Ohio). “Why don’t they just have the score written in McConnell’s office by his staff?”

Whatever the Senate produces must be acceptable to a majority of the House, or else the two chambers could get bogged down in weeks or months of negotiations. But changes that would make the Senate bill more acceptable to moderates there would likely not be able to get through the more conservative House. Leaders are walking a thin tightrope.

On the other hand, Republicans continue to be driven by the imperative of keeping their seven-year promise to overturn the health law.

“Virtually every Republican in this body has supported the effort to repeal and replace Obamacare more or less since the day it was signed into law,” Senate Finance Committee Chairman Orrin Hatch (R-Utah) said on the floor. “This legislation, while far from perfect, would fulfill the vast majority of those promises.”

Kaiser Health News (KHN) is a national health policy news service. It is an editorially independent program of the Henry J. Kaiser Family Foundation. (Photo by Gage Skidmore via Flickr)