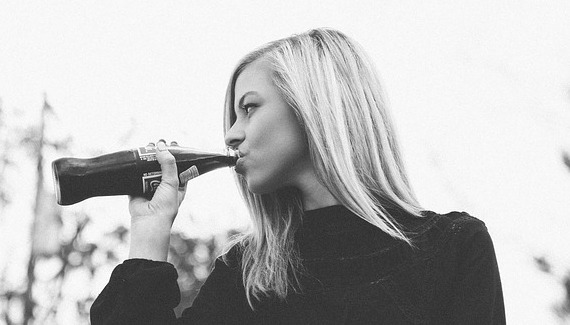 Many people drink diet soda to avoid the excessive calories found in the regular stuff.  Turns out, both regular and diet soda may be linked to memory problems including Alzheimer’s disease.

Researchers from Boston University School of Medicine found that people who drink lots of sugary beverages — including sodas and fruit juices — have poorer memory and smaller overall brain volumes.  But diet soda presents its own set of problems.

“People drinking diet soda daily were almost three times as likely to develop stroke and dementia,” said study author Matthew Pase, PhD, fellow in the department of neurology at BUSM. “This included a higher risk of ischemic stroke, where blood vessels in the brain become obstructed, and Alzheimer’s disease.”

As part of the Framingham Heart Study, researchers monitored 2,888 participants age 45 and over for the development of a stroke and 1,484 participants age 60 and older for dementia for 10 years. After excluding preexisting conditions including diabetes and high blood pressure, diet soda consumption was still associated with the risk of dementia.

“We know that sugary beverages are associated with poorer health outcomes,” said Pase.  However, “diet sodas might not necessarily be a healthy alternative to sugar sweetened beverages.”

Researchers are not recommending a return to sugary beverages as they present similar brain deficiencies as well as obesity and diabetes.  But you may want to grab a bottle of water as an alternative to any soda.

“It’s important to realize that our study cannot draw cause and effect between beverage intake and the risk of stroke or the risk of dementia,” said Pase.  “However, we advise that people are cautious about their intake of diet sodas.”

These results of these studies appear separately in the journals Alzheimer’s & Dementia and Stroke.