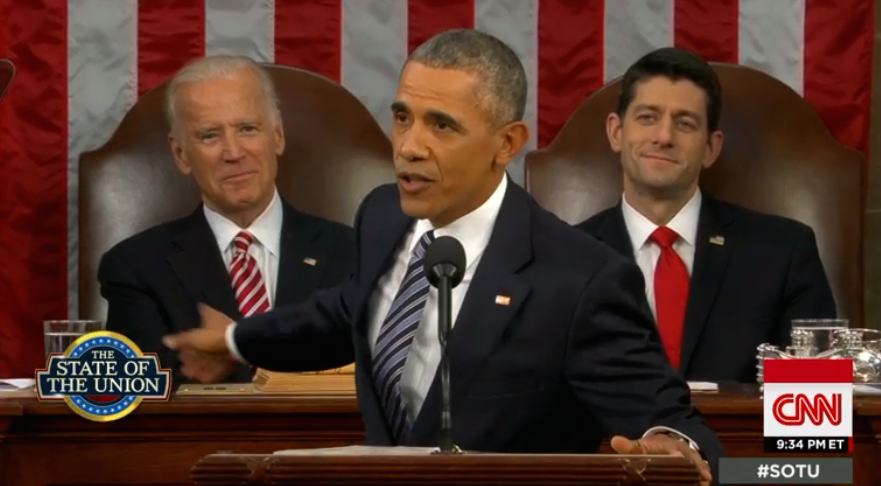 “Let’s make America the country that cures cancer once and for all.”

With those words, President Obama on Tuesday launched a new generation’s ‘moonshot,’ a reference to President John F. Kennedy’s 1962 challenge to travel to the moon by the end of that decade.

In his final State of the Union Address, President Obama announced a national effort to find a cure for cancer and tapped Vice President Joe Biden to lead the operation.

“Last month, [the Vice President] worked with this Congress to give scientists at the National Institutes of Health the strongest resources they’ve had in over a decade,” said Obama. “Tonight, I’m announcing a new national effort to get it done. And because he’s gone to the mat for all of us, on so many issues over the past forty years, I’m putting Joe in charge of Mission Control.”

Biden, who recently lost his son Beau to brain cancer, received a standing ovation from both sides of the aisle.

“It’s personal for me,” said Biden in a post on Medium. “But it’s also personal for nearly every American, and millions of people around the world. We all know someone who has had cancer, or is fighting to beat it.”

Following the loss of his son, Biden announced last year that he would not run for president.

“The grieving process,” Biden said in his October announcement, “closes the window on mounting a realistic campaign for president.”

However, the Vice President said he would continue to continue to be a major influence in Washington, for his party, and for the country.  One of those pledges includes his work to help find a cure for cancer.

“Over the course of the past few months, I’ve met with nearly 200 of the world’s top cancer physicians, researchers, and philanthropists,” said Biden. “And the goal of this initiative — this ‘Moonshot’ — is to seize this moment. To accelerate our efforts to progress towards a cure, and to unleash new discoveries and breakthroughs for other deadly diseases.”

Biden will officially launch the Cancer Moonshot 2020 program Friday at the University of Pennsylvania’s Perelman School of Medicine followed by a meeting next week with experts at the World Economic Forum in Davos, Switzerland to further discuss the program, which hopes to develop a vaccine-based immunotherapy to cure cancer by the end of the decade.

“Fifty-five years ago, President John F. Kennedy stood before a joint session of Congress and said, ‘I believe we should go to the moon,'” said Biden. “This is our moonshot. I know that we can help solidify a genuine global commitment to end cancer as we know it today.”