Breaking News
Home / Featured / Medical scribes are on the rise, but standards lacking

Medical scribes are on the rise, but standards lacking 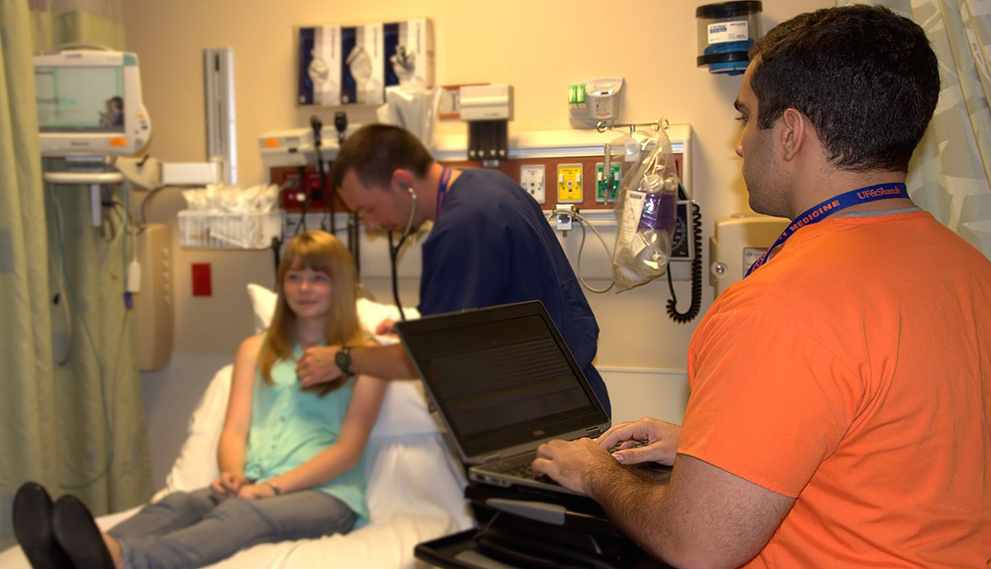 A national campaign for electronic health records is driving business for at least 20 companies with thousands of workers ready to help stressed doctors log the details of their patients’ care — for a price. Nearly 1 in 5 physicians now employ medical scribes, many provided by a vendor, who join doctors and patients in examination rooms. They enter relevant information about patients’ ailments and doctors’ advice into a computer, the preferred successor to jotting notes on a clipboard as doctors universally once did.

The U.S. has 15,000 scribes today and their numbers will reach 100,000 by 2020, estimates ScribeAmerica, the largest competitor in the business. After buying three rivals this year, it employs 10,000 scribes working in 1,200 locations.

Regulation and training are not rigorous. Scribes are not licensed. About a third of them are certified and that’s voluntary, according to the sole professional body for scribes. The American College of Scribe Specialists was created by ScribeAmerica’s founders in 2010.

“This is literally an exploding industry, filling a perceived gap, but there is no regulation or oversight at all,” said George Gellert, regional chief medical informatics officer at Christus Santa Rosa Health System in San Antonio, which uses scribes.

Others suggest that scribes can be a benefit to doctors and patients by shouldering the minutia of recording many of the details on a computer. “They’re capturing the story of a patient’s encounter — and afterward, doctors make sure everything is accurate. That way, the doctor can focus on interacting with the patient and give them good bedside manner,” said Angela Rose, a director at the American Health Information Management Association, a professional group that has published a set of best practices for scribes.

The minimum qualification to be a scribe is generally a high school diploma, but some pre-med students take the jobs to gain experience from shadowing doctors. One company, SuperScribe, says it prefers candidates with at least two years of college and it only hires pre-med, nursing or EMT students. ScribeAmerica provides two weeks of training to new scribes while a large rival, PhysAssist, gives one week. That’s followed by close supervision in care settings for one week at ScribeAmerica and 72 hours at PhysAssist.

Vendors stress the potential benefits for doctors when they spend less time on record keeping. “Don’t let paperwork stand between you and your patients,” PhysAssist tells physicians on its website. “Imagine a doctor not being able to make correct diagnoses because documentation distractions caused her to miss a symptom.”

Not everyone is sold. Patrick Tempera, a gastroenterologist in Union City, N.J., said he uses scribes but does not allow them to come into the exam room with him because patients discuss sensitive health matters with him.

“Patients might not tell the doctor in full disclosure certain personal things if there’s someone else in the room,” he said.

Federal law limits some of the work that scribes can do. The Health Information Technology for Economic and Clinical Health (HITECH) Act, which was part of the 2009 stimulus package and sent $32 billion to doctors, hospitals and other providers to spur them to move to electronic health records (EHRs), mandated that unlicensed workers, which includes scribes, not enter orders such as those for prescriptions and X-rays. However, sometimes scribes are allowed to enter pending orders, subject to a doctor’s review and approval.

A key hospital accreditation group also stresses those limitations. The Joint Commission, which accredits hospitals, said in 2012 guidelines that scribes can enter information such as family history, symptoms and doctors’ tentative diagnoses into EHRs. But it said scribes should not put in orders for prescriptions, X-rays or tests.

One concern is that scribes don’t have the background to make sure they put the right information in the orders.

Pages: 1 2
doctors electronic health records medical scribes 2015-12-07
Physicians News
Share
Previous All kids should be screened for cholesterol, depression and HIV
Next Ovarian cysts in mom may raise risk for autism in child