Light From Smartphones, Tablets May Lower Melatonin in Kids 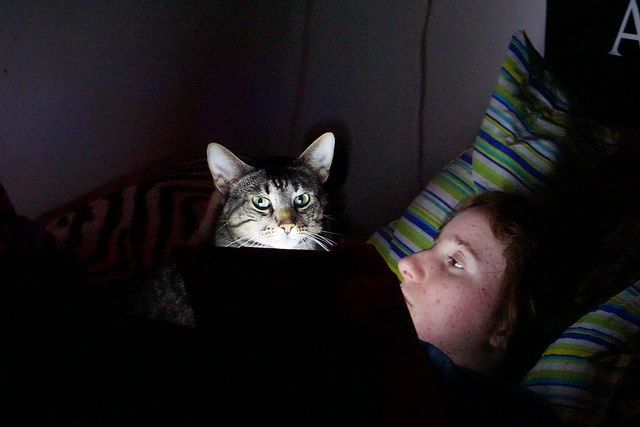 New research offers a compelling reason for parents to ban smartphones, tablets and laptops in their children’s bedrooms at night: The bright light of these devices may lower levels of melatonin, a hormone that prompts sleep.

The effect was most pronounced for kids just entering puberty, with nighttime melatonin levels suppressed by up to 37 percent in some cases, the investigators found.

With a recent study suggesting that 96 percent of teens use at least one high-tech device in the hour before bedtime, the researchers have a suggestion for parents.

“The message is that we really have to be careful about protecting our especially young teens from light at night, which means parents need to get all screens out of the bedroom, because ultimately they can be quite damaging to a child’s capacity to get enough sleep,” said study co-author Mary Carskadon. She is a professor of psychiatry and human behavior at Brown University’s Alpert Medical School, in Providence, R.I.

To some degree, the shift is likely prompted by several social factors, including the loosening of parental restrictions, budding friendships and media. But scientists believe that biological factors also play a role, as a child’s internal sleep clock starts to change.

At the heart of that change is light sensitivity, said Carskadon, who’s also director of the Sleep and Chronobiology Research Laboratory at the E.P. Bradley Hospital. Her team theorized that puberty increases a child’s sensitivity to light at night, causing melatonin levels to stay low and delay sleep.

But the researchers also suspected this natural process could be knocked out of whack when newly light-sensitive children are around the bright glare of modern technology.

For four nights, all were exposed to a single hour of light, involving four different brightness levels. Brightness levels ranged from near-dark “romantic restaurant lighting” all the way up to what Carskadon called “light you would find in the produce section of your favorite large supermarket.”

The result: While melatonin readings were uniform during the early morning light tests, late-night light tests caused much greater melatonin suppression among boys and girls at the earliest stages of puberty.

The study did not prove that bright light before bedtime causes adolescents to get less sleep, however.

“We cannot say we found a sleep ‘disturbance,'” Carskadon said. “But what we did find was that young children exposed to light at bedtime saw their melatonin production suppressed. And this could cause sleep rhythms to be affected in a way that causes children to stay up later, which is exactly what adolescents need not to be doing.”

“It doesn’t surprise me,” he said. “At puberty onset, the circadian pattern is very unstable and very sensitive to light. So the problems they’re finding make sense.”

That opinion was seconded by Kelly Baron, director of the Behavioral Sleep Medicine Program at Northwestern University’s Feinberg School of Medicine in Chicago.

“This study didn’t actually test how light affected sleep itself, but it did find that it causes a problem on the pathway to sleep by suppressing melatonin,” Baron said.

“At the same time, other studies have consistently shown that electronics in the bedroom are detrimental to sleep for both parents and kids, frankly, which means we all really should be thinking about ways to limit our exposure to electronics, and light in general, before we go to bed,” Baron said.

The study findings were published online recently in the Journal of Clinical Endocrinology & Metabolism.

There’s more on teens and sleep at the National Sleep Foundation. Copyright © 2015 HealthDay. All rights reserved. Photo by Steve Harwood via Flickr.