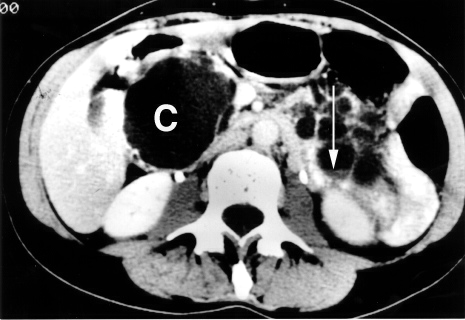 PCNs are generally categorized as mucinous or non-mucinous. Differentiating between these two types is important because non-mucinous PCNs are commonly benign without risk of malignancy, while mucinous PCNs can have an appreciable, though low, risk of malignant transformation. Given the high rate of mortality associated with pancreatic malignancy, and high cost and risks associated with surgery on benign cysts, it is crucial to identify strategies to better identify and assess PCNs as being neoplasitc and if so, then determining individual patient risk as high or low risk for cancer.

Standard diagnostic modalities for categorizing PCs include imaging, specifically endoscopic ultrasound (EUS), carcinoembryonic antigen (CEA) testing and cytology. Each of these modalities has limitations in differentiating the sub-types, with malignant potential of these cysts then difficult to determine. As a result, clinicians find it challenging to choose between surveillance and surgery. Surveillance is a conservative approach in which progression to cancer may remain a concern. Surgery, however, has high associated morbidity. Many resected cysts are benign, resulting in unnecessary surgery and morbidity for patients and excessive costs to the healthcare system.

Integrated molecular pathology (IMP) is a promising new risk-stratification tool used to predict malignant potential of pancreatic cysts. IMP of patient cyst fluid may improve the physician’s ability to distinguish mucinous from non-mucinous cysts and is particularly helpful in predicting the malignant potential of pancreatic cysts. Commercially available IMP diagnostic tests classify PCs as benign, mucinous or aggressive based on the level of mutational change in cyst fluid. Use of IMP can help clinicians more accurately determine which cysts have a greater potential to progress to cancer, providing significant improvements in risk stratification. The ability to more accurately assess a patient’s risk of cancer progression with IMP can help reduce rates of unnecessary surgeries and associated costs.

Results of a multicenter study published in the February 2015 issue of Endoscopy showed that one commercially available IMP, PancraGen, is 90 percent accurate at predicting benign and malignant disease in patients with pancreatic cysts. This molecular diagnostic tool utilizes a cytopathology platform to provide a full mutational analysis on aspirate fluids from the free, or released, DNA in cyst fluid specimens.

A recent study initiated out of our institution and published online in Endoscopy International Open, titled “Managing incidental pancreatic cystic neoplasms with integrated molecular pathology is a cost-effective strategy,” found that the use of IMP was the most cost-effective strategy for diagnosing and managing asymptomatic PCN, supporting its routine clinical use. The study used healthcare economic modeling to evaluate IMP in comparison to three other management strategies in a hypothetical cohort of 1,000 asymptomatic patients with a 3-cm solitary pancreatic cystic lesion:

Quality-adjusted life years and incremental cost-effectiveness ratios were calculated for each strategy. The study found that the expense of even a few unnecessary surgeries greatly exceeded the comparably lower cost of IMP testing.

Limitations of the study included many of those inherent in any healthcare economic model. The study only examined direct versus indirect costs, and did not consider postoperative morbidity and complications related to EUS-FNA procedures. Because the natural history of PCN is not fully understood, our model made assumptions about some of the variables in which data are lacking. The surgical risk score developed for this analysis should undergo further clinical validation.

Based on this study, IMP has significant clinical value for physicians and their patients with pancreatic cysts. Due to the limitations of current standard diagnostic modalities in providing consistent, meaningful prediction of malignant potential of PCNs, IMP represents the most cost-effective strategy for managing PCNs and holds tremendous potential as a risk-stratification tool for clinicians with pancreatic cyst patients.