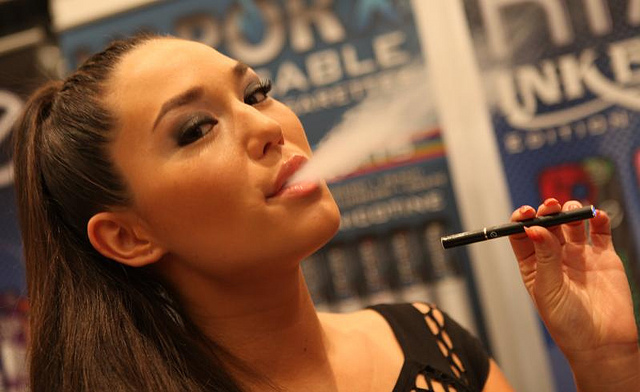 Teenagers who use electronic cigarettes may be more likely to smoke the real thing, new research suggests.

The study, which included almost 2,100 California high school students, found that one-quarter had ever “vaped” (tried e-cigarettes). Ten percent of the teens were currently using e-cigarettes. And those current users were much more likely than their peers to also smoke cigarettes. One-third of e-cigarette users also smoked tobacco cigarettes, versus 1 percent of kids who’d never vaped.

Researchers said the findings do not prove e-cigarettes act as a gateway to tobacco use.

But they raise the possibility that e-cigarettes are encouraging a more tobacco-friendly culture among kids, said study leader Jessica Barrington-Trimis, a researcher at the University of Southern California.

The study also found that most kids who used e-cigarettes also had friends or family members who used them. And about half believed these products were harmless.

Those positive attitudes, in turn, were linked to a greater risk of kids’ smoking cigarettes as well.

The study, published online July 27 in the journal Pediatrics, comes on the heels of a federal report showing that e-cigarettes are soaring in popularity. Between 2011 and 2014, use of the devices tripled among U.S. middle school and high school students.

The good news in that report was that cigarette smoking was down: It seems many kids who use e-cigarettes have never smoked the traditional version.

That was true in the current study. While many e-cigarette fans also smoked, about 40 percent of current users said they’d never lit up a traditional cigarette.

That pattern is “disturbing,” because it suggests that some kids who otherwise wouldn’t smoke are still being exposed to nicotine, said Vaughan Rees, director of the Center for Global Tobacco Control at the Harvard School of Public Health, in Boston.

“It represents evidence of the failure of traditional tobacco-control measures to prevent adolescents’ experimentation [with] e-cigarettes,” said Rees, who was not involved in the study.

Most U.S. states ban e-cigarette sales to minors, according to the National Conference of State Legislatures. But for now, the U.S. Food and Drug Administration does not regulate the devices, unless they are specifically marketed for “therapeutic purposes,” meaning smoking cessation.

The agency hopes to expand its authority over e-cigarettes — a move that could put a national ban on sales to minors and require federal approval of all e-cigarette devices and the flavored nicotine “juices” used in them.

According to Rees, the current lack of regulation over e-cigarette marketing is a problem.

“We are seeing adolescents who might not smoke a conventional product — because of the health risk and social stigma — using e-cigarettes,” he said.

Rees acknowledged that the potential health risks of e-cigarettes, themselves, are “not yet fully understood.” The battery-powered devices produce no tobacco smoke, but they do contain nicotine — the drug that makes tobacco products so addictive.

Whether that nicotine is any danger to kids is unclear. “The greater concern,” Rees said, “is the potential for tobacco manufacturers to target young adult e-cigarette consumers — who may be vulnerable to tobacco-industry messaging because of their dependence on nicotine.”

David Abrams, executive director of the Schroeder Institute for Tobacco Research and Policy Studies, an anti-tobacco group, said, “It is troubling that a lot of kids are experimenting with e-cigarettes.”

However, he also said the consequences of that experimentation are not clear. This study does not show whether kids’ e-cigarette use, or positive attitudes toward it, had any bearing on their cigarette use.

Plus, “current use” was defined as any e-cigarette use over the past month, Abrams pointed out. The real concern, he said, would be habitual use — an indicator of nicotine dependence.

All of that said, “we still don’t want kids using these things,” Abrams stressed.

“It’s a concern because nicotine is a drug, it’s not harmless,” he said. “And we can’t know who is going to end up being hooked.”

Abrams agreed that tighter regulation would help. “The FDA should hurry and put some controls over the advertising and distribution of [e-cigarettes],” he said.

Still, there are cases where e-cigarettes are the less hazardous path, Abrams added. Some kids who are already smoking might try e-cigs as a “gateway out” of the habit. And parents might want to be open to that, he said.

The U.S. Food and Drug Administration has more on e-cigarettes. Copyright © 2015 HealthDay. All rights reserved. (Photo by Michael Dorausch via Flickr)