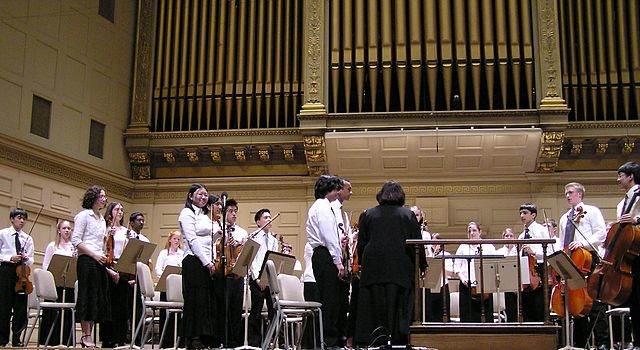 The findings suggest that music instruction can help teens do better in school, according to Northwestern University researchers.

“While music programs are often the first to be cut when the school budget is tight, these results highlight music’s place in the high school curriculum,” the study’s senior author, Nina Kraus, said in a university news release. Kraus is director of the Auditory Neuroscience Laboratory at Northwestern’s School of Communication.

“Although learning to play music does not teach skills that seem directly relevant to most careers, the results suggest that music may engender what educators refer to as ‘learning to learn,’ ” she added.

The study included 40 freshmen at high schools in low-income Chicago neighborhoods who were followed until their senior year. Nearly half participated in band classes that involved two to three hours a week of instrumental group music instruction at school.

The remainder of the students enrolled in junior Reserve Officers’ Training Corps, which emphasized physical fitness.

Over the study’s three years, the music students showed faster maturation in the brain’s response to sound, as well as heightened brain sensitivity to sound details.

All of the participants showed improvements in language skills linked to sound structure awareness, but the improvement was greater among those in the music group than those in the ROTC group.

The findings, published the week of July 20 in the journal Proceedings of the National Academy of Sciences, suggest that high school music training might boost brain development and improve language skills, according to the study authors.

“Our results support the notion that the adolescent brain remains receptive to training, underscoring the importance of enrichment during the teenage years,” they wrote.

The U.S. National Institute of Mental Health has more about the teen brain. Copyright © 2015 HealthDay. All rights reserved. Photo by Fullerene via Wikipedia.