‘Overwhelming’ Evidence That Same-Sex Parents Will Not Harm Kids 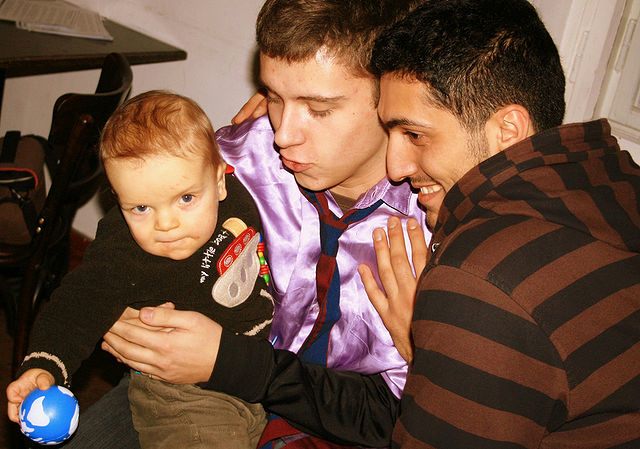 There is no evidence that having same-sex parents harms children in any way, a new comprehensive review finds.

The well-being of children of same-sex couples was an issue the U.S. Supreme Court addressed in its landmark 5-4 ruling on Friday that upheld the legality of gay marriage.

“Without the recognition, stability and predictability marriage offers, children suffer the stigma of knowing their families are somehow lesser,” Justice Anthony Kennedy wrote in the majority opinion. “They also suffer the significant material costs of being raised by unmarried parents, relegated to a more difficult and uncertain family life. The marriage laws at issue thus harm and humiliate the children of same-sex couples.”

In the new review, Jimi Adams, associate professor of health and behavioral studies at the University of Colorado Denver, said he wanted to find out if children suffered any disadvantages simply because their parents were of the same sex.

“As same-sex marriage has been debated in courts across the country, there has been the lingering question about the effects of same-sex parenting on children,” Adams said in a university news release.

“I found overwhelming evidence that scientists agree that there is not a negative impact to children of same-sex couples,” he said.

Adams’ team analyzed data from thousands of studies on the issue. The data overwhelmingly found that children of same-sex parents do not differ from those of heterosexual or single parents on a range of social and behavioral outcomes.

According to the research, by 1990 a consensus between researchers on the issue began to emerge, and by 2000 “overwhelming” consensus had been reached that same-sex parenting does not harm children.

One expert in child mental health “applauded” the new research.

The issue “has been studied and the overwhelming evidence has supported this finding for the past 25 years,” said Dr. Victor Fornari, who directs the division of child and adolescent psychiatry at the Zucker Hillside Hospital in Glen Oaks, N.Y., and Cohen Children’s Medical Center in New Hyde Park, N.Y.

The American Association for Marriage and Family Therapy has more about same-sex parents and their children. Copyright © 2015 HealthDay. All rights reserved. Photo by Kurt Löwenstein Educational Center International via Wikimedia Commons.