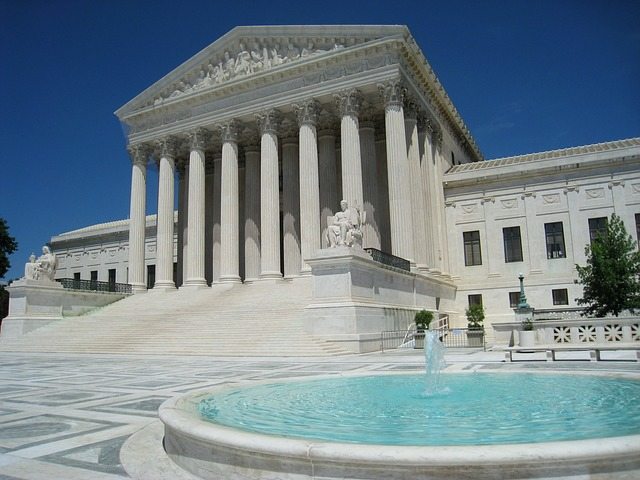 That was the rallying cry Thursday at demonstrations outside of the U.S. Supreme Court as people cheered the decision to uphold Obamacare as law of the land.

The Supreme Court ruled in a 6-3 decision that the Affordable Care Act is constitutionally sound when it said that federal tax credits can be offered in state and federal health care exchanges.

“Congress passed the Affordable Care Act to improve health insurance markets, not to destroy them,” Chief Justice John Roberts wrote for the court’s majority. “If at all possible, we must interpret the Act in a way that is consistent with the former, and avoids the latter.”

“After multiple challenges before the Supreme Court, this law is here to stay,” said President Obama, who outlined the benefits of the Affordable Care Act and assured that the Act is working and has benefited more than 10 million Americans.

President Obama said that Thursday’s decision will ensure that one day children may ask in wonder: “Was there really a time when Americans discriminated against people who were sick?’

“Rather than rewriting the law under the pretense of interpreting it, the Court should have left it to Congress to decide what to do about the Act’s limitation of tax credits to state Exchanges,” said Justice Scalia. “We should start calling this law SCOTUScare,” he said in a reference to the second time the Supreme Court has ruled in favor of Obamacare.

In the case, King v. Burwell, conservatives argued that the language of the law — specifically the four words “established by the state” — meant that federal tax credits should not extend to states in which the federal government was operating the health care exchanges.

While Justice Roberts conceded that “the Act does not reflect the type of care and deliberation that one might expect of such significant legislation,” regarding those four words about tax credits, “those credits are necessary for the Federal Exchanges to function like their State Exchange counterparts, and to avoid the type of calamitous result that Congress plainly meant to avoid.”

Thursday’s ruling ensures that President Obama’s signature legislative achievement will survive his presidency.   But how far beyond that remains to be seen.

“This decision is not the end of the fight against Obamacare,” said presidential candidate Jeb Bush, who was just one of conservative Republicans to vow to end the Affordable Care Act.

“I disagree with the Court’s ruling and believe they have once again erred in trying to correct the mistakes made by President Obama and Congress in forcing Obamacare on the American people,” said Florida Senator Marco Rubio, also a Republican presidential candidate. “I remain committed to repealing this bad law and replacing it with my consumer-centered plan that puts patients and families back in control of their health care decisions.”

Those on the positive side of the decision include the American Medical Association, which “is relieved that today’s Supreme Court decision will allow millions of patients to continue accessing the health care they need and deserve,” said AMA President Steven J. Stack, MD. “Physicians know that the uninsured live sicker and die younger so the AMA has been a leading voice in support of expanding health insurance access to ensure patients can get the care they require.”

Robert Wergin, MD, President of the American Academy of Family Physician, also gave approval of today’s decision to uphold Obamacare.”As family physicians, we saw the negative impact that lack of insurance had on patients’ ability to get the care they needed when they needed it,” said Dr. Wergin. “Too often, patients without insurance would forgo or postpone needed care due to cost, then arrive in our exam room with conditions that could have been prevented or at least mitigated. By that time, they needed care that was more intensive and expensive.”

Dr. Wergin said that the benefits of the Affordable Care Act have been apparent in family medicine practices. “Now, as more people have been able to buy insurance, we see fewer of these challenges and more positive results from having a usual source of care.”

While many physicians support the decision to uphold Obamacare, some say it’s still not enough.  A single-payer system would be a better solution, according to Physicians for a National Health Program, a group of 19,000 docs who support national health care insurance.”The unfortunate reality is that the ACA, despite its modest benefits, is not a remedy to our health care crisis: (1) it will not achieve universal coverage, as it will still leave at least 27 million uninsured in 2025, (2) it will not make health care affordable to Americans with insurance, because of high copays, deductibles and gaps in coverage that leave patients vulnerable to financial ruin in the event of serious illness, and (3) it will not control costs,” said a PNHP spokesperson.

“In contrast, a single-payer system – an improved Medicare for All – would achieve truly universal care, affordability, and effective cost control. It would put the interests of our patients – and our nation’s health – first.”