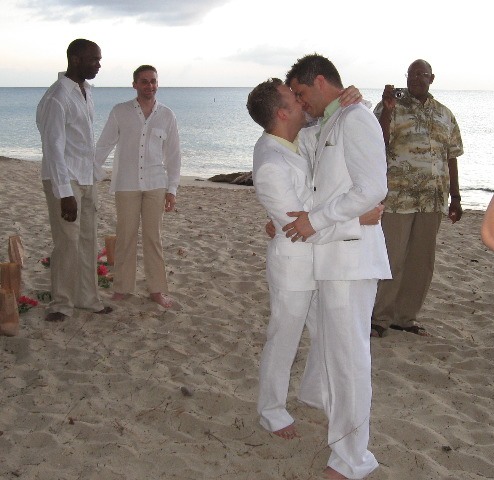 With the U.S. Supreme Court poised to rule on whether same-sex marriage is a national right, many social scientists say an affirmative ruling in the landmark case would also deliver psychological dividends to the lesbian, gay, bisexual and transgender (LGBT) community.

A marriage contract offers many legal protections and benefits. But equally important is the security and sense of well-being it can provide couples, the experts explained.

“We’re a very marriage-prone society,” said Susan Roxburgh, a professor in the department of sociology at Kent State University in Ohio. “If you take a group of Americans in their 50s, something like 90 percent of them will have been married at least once. And part of the reason is that there’s clearly a marriage benefit.

“Part of it is the element of social control and social support,” she said. “It adds a great deal of prediction to daily life. Someone is looking after your health, after your well-being. So married people tend to be in better mental and physical health than the unmarried. They live longer, and they have lower rates of suicide and depression.”

Robin Simon, a professor in the department of sociology at Wake Forest University in Winston-Salem, N.C., agreed.

“Marriage is a source of purpose and meaning and security that offers a big psychological and social boost,” she said. “It’s very clear, even when compared with unmarried co-habitators who live together in a committed relationship. Yes, those couples do better than single folks. But married people do the best on all measures of psychological well-being, which is, of course, a main reason why the LGBT community wants marriage.”

There are those who disagree with the concept of gay marriage — primarily religious organizations and conservatives who insist that, for millennia, marriage has been an institution for a man and a woman. Many of these opponents of same-sex marriage endorse the idea of civil unions between gay couples.

However, psychiatrist Dr. Jack Drescher, a gender and sexuality expert in private practice in New York City, said that when it comes to weighing the desire for the social benefits of marriage against the desire for legal protections, “you really can’t separate the two.”

“When gay marriage is legalized, that’s the state giving its blessing, that the relationship is authentic and recognized and has legal ramifications,” he said. “But without that, then who gets to visit in the hospital if someone gets sick? That becomes an issue. How do gay couples move from state to state, when states have different laws? How do gay couples who have children in common handle adoption? How does a child get explained that their same-sex parent’s relationship is, in the eyes of some, less than others?”

“Marriage provides stability, both for relationships and for families,” Drescher added. “But the confusion that arises from denying marriage creates an enormous amount of anxiety and uncertainty.”

“Preventing people from enjoying the social benefits of marriage is itself distressing, because marriage is a form of social integration, a connection with the broader community,” she said. “So, not allowing a person to marry can seriously erode his sense of well-being. It’s a blatant form of systemic social rejection.”

And that, says psychiatric epidemiologist Ilan Meyer, means that the push to broaden the access to marriage to all Americans is ultimately a symbolic stance against LGBT prejudice.

“Gay people have always formed relationships,” said Meyer, who is a senior scholar for public policy with the Williams Institute for Sexual Orientation Law and Public Policy at the UCLA School of Law in Los Angeles. “But even if a couple feels satisfied in its own relationship, if it’s relegated to a separate category outside of marriage, then that is society placing a stigma on that relationship. It sends a message that you’re not part of this society, that you’re not equal and your relationship is not valued.

“So to me, the inclusion of the LGBT community in the institution of marriage would reverse this rejection by sending a strong message of respect and dignity and inclusion,” added Meyer. He delivered this argument when serving as an expert witness for the plaintiffs in the 2010 federal case that overturned California’s ban on same-sex marriage, also known as “Proposition 8.”

“The point,” said Meyer, “is that apart from the very practical protections that come with marriage, the really important element here is that marriage is really a very core thing about who you are attracted to and who you want to build your life with.

“So, the symbolism of normalizing the institution to include gay people will benefit not only those who want to get married but even those who don’t,” added Meyer. “It won’t end homophobia, any more than the 1964 Civil Rights Act ended racism. But it will chip away at it. It will say that gay people are not inferior. It will say that they are equal.”

For more on the debate over same sex marriage, visit openreader.org.
Copyright © 2015 HealthDay. All rights reserved. Photo by Stagedoorjohnny via Wikimedia Commons.