Medicare Slow To Adopt Telemedicine Due To Cost Concerns 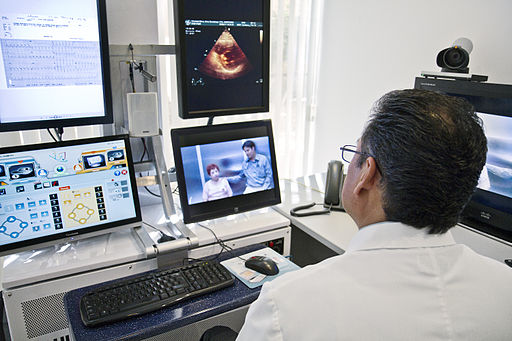 Donna Miles didn’t feel like getting dressed and driving to her physician’s office or to a retailer’s health clinic near her Cincinnati home.

For several days, she had thought she had thrush, a mouth infection that made her tongue sore and discolored with raised white spots. When Miles, 68, awoke on a wintry February morning and the pain had not subsided, she decided to see a doctor. So she turned on her computer and logged on to www.livehealth.com, a service offered by her Medicare Advantage plan, Anthem BlueCross BlueShield of Ohio. She spoke to a physician, who used her computer’s camera to peer into her mouth and who then sent a prescription to her pharmacy.

“This was so easy,” Miles said.

Nearly 20 years after such videoconferencing technology has been available for health services, fewer than 1 percent of Medicare beneficiaries use it. Anthem and a University of Pittsburgh Medical Center health plan in western Pennsylvania are the only two Medicare Advantage insurers offering the virtual visits, and the traditional Medicare program has tightly limited telemedicine payments to certain rural areas. And even there, the beneficiary must already be at a clinic, a rule that often defeats the goal of making care more convenient.

Congress has maintained such restrictions out of concern that the service might increase Medicare expenses. The Congressional Budget Office and other analysts have said giving seniors access to doctors online will encourage them to use more services, not replace costly visits to emergency rooms and urgent care centers.

In 2012, the latest year for which data are available, Medicare paid about $5 million for telemedicine services — barely a blip compared with the program’s total spending of $466 billion, according to a study in the journal Telemedicine.

“The very advantage of telehealth, its ability to make care convenient, is also potentially its Achilles’ heel,” Ateev Mehrotra, a Rand Corp. analyst, told a House Energy and Commerce subcommittee last year. “Telehealth may be ‘too convenient.'”

“There is no question that telemedicine is going to be an increasingly important portal for doctors and other providers to stay connected with patients,” former Surgeon General Richard Carmona said in an interview.

Some health experts say it’s disappointing that most seniors can’t take advantage of the benefit that many of their children have.

“Medicare beneficiaries are paying a huge price” for not having this benefit, said Jay Wolfson, a professor of public health, medicine and pharmacy at the University of South Florida in Tampa. For example, he said, telemedicine could help seniors with follow-up appointments that might be missed because of transportation problems.

Aetna and UnitedHealthcare cover telemedicine services for members younger than 65, regardless of whether enrollees live in the city or in the country. About 37 percent of large employers said that they expect to offer their employees a telemedicine benefit this year, according to a survey last year by Towers Watson, an employee benefits firm. About 800,000 online medical consultations will be done in 2015, according to the American Telemedicine Association, a trade group.

Medicare’s tight lid on telemedicine is showing signs of changing. In addition to Medicare Advantage plans, several Medicare accountable care organizations, or ACOs — groups of doctors and hospitals that coordinate patient care for at least 5,000 enrollees — have begun using the service. Medicare Advantage plans have the option to offer telemedicine without the tight restrictions in the traditional Medicare program because they are paid a fixed amount by the federal government to care for seniors. As a result, Medicare is not directly paying for the telemedicine services; instead, the services are paid for through plan revenue.

Republicans and Democrats in Congress are also considering broadening the use of telemedicine; some of them tried unsuccessfully to add such provisions to the recent law that revamped Medicare doctor payment rules and to the House bill that seeks to streamline drug approvals.

This year, Medicare expanded telemedicine coverage for mental health services and annual wellness visits — when done in certain rural areas and when the patient is at a doctor’s office or health clinic.

“Medicare . . . is still laboring under a number of limitations that disincentivize telemedicine use,” said Jonathan Neufeld, clinical director of the Upper Midwest Telehealth Resource Center, an Indiana-based consortium of organizations involved in telemedicine. “But ACOs and other alternative payment methods have the possibility of changing this dynamic.”

AARP wants Congress to allow all Medicare beneficiaries to have coverage for telemedicine services, said Andrew Scholnick, a senior legislative representative for the lobbying group. “We would like to see a broader use of this service,” he said. He stressed that AARP prefers that Medicare patients use telemedicine in conjunction with seeing their regular doctor.

The American Medical Association has endorsed congressional efforts to change Medicare’s policy on telemedicine, as has the American Academy of Family Physicians. “We see the potential for it . . . to improve quality and lower costs,” said Robert Wergin, president of the academy and a family doctor in Milford, Neb. He said such technology can help patients who are disabled or don’t have easy transportation to the doctor’s office.

Anthem, which provides its telemedicine option to about 350,000 Medicare Advantage members in 12 states, expects the system to improve care and make it more affordable. “It’s also about the consumer experience and giving consumers convenience to be able to be face to face with a doctor in less than 10 minutes, 365 days a year,” said John Jesser, an Anthem vice president. Anthem provides the service at no extra charge to its Medicare Advantage members.

While seniors are more likely to have more complicated health issues, telemedicine for them is no riskier than for younger patients, said Mia Finkelston, a family physician in Leonardtown, Md., who works with American Well, a firm that provides the technology behind Livehealth.com. That’s because the online doctors know when they can handle health issues and know when to advise people to seek an in-person visit or head to the emergency room, she said.

“Our intent is not to replace their primary care physician, but to augment their care,” she said.

KHN’s coverage of aging and long-term care issues is supported in part by a grant from The SCAN Foundation. Kaiser Health News (KHN) is a nonprofit national health policy news service.