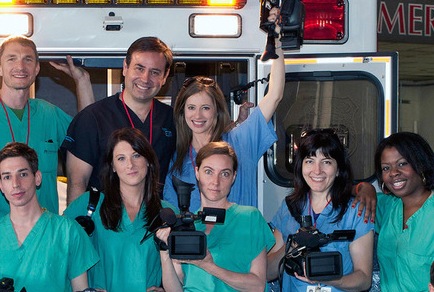 In an attempt to create new and compelling content for a social media and viral millennial audience, reality television producers have moved from the dorm room to the operating room. The popularity of television programs like ER and Grey’s Anatomy enticed Hollywood to offer a look at the “real life” drama of actual hospitals and emergency rooms.

But should reality TV have access to a real E.R.? Should doctors and patients be subjected to the lights and cameras of a television production during real life and death situations?

Neal Baer, MD, of UCLA’s Fielding School of Public Health and a former writer and producer of the television show ER, said in the current issue of JAMA: Internal Medicine that the goal of a reality TV producer is “to capture all the messy conflict in the life-and-death decisions being made around the clock. Their agenda conflicts baldly with our duty to our patients.”

Reality shows like Boston Med and NY Med actually fall under the banner of ABC News, which has added credibility compared to producers of Real Housewives or The Bachelor.  The cache of a major news division gets cameras into major medical institutions like New York–Presbyterian, Brigham and Women’s, and Massachusetts General.

But the goal is the same as any other reality show: create compelling dramatic content for the audience.

“The point here is that these reality medical series are much like the dramas that I wrote on ER,” said Dr. Baer. “They are constructed—in their case from thousands of hours of footage, with telegenic physicians taking the viewer through the minefield of the decisions, elations, and tragedies only the ED (emergency department) can provide.”

Terence Wrong, executive producer of NY Med, acknowledged in an interview with Capital New York that he wants the drama.  “There were people I shot who turned out not to be so interesting, there were people who occasionally people who are so ambivalent about being filmed that they are sabotaging the tape you are shooting of them while you are shooting it,” Wrong said in reference to editing the show for television.

The goal of the show, according to Wrong, is “the ‘goodbye’ moment, it is the moment where a family says goodbye to their loved one going into surgery, if you don’t capture that moment, because a nurse shut the door on your cameras face, you kill that piece.”

“It is hard to see what benefit comes to a patient when his or her most personal problems are displayed on the television screen,” said Dr. Baer.

That was the case of Mark Chanko, who died in April 2011 after being struck by a sanitation truck near his home in New York City.  Three years later, Chanko’s widow, Anita, was flipping through the channels and stops when she sees her late husband’s doctor on the screen caring for a victim of a vehicle accident.

“And then I see, even with the blurred picture, you could tell it was him,” Anita Chanko told the New York Times. “You could hear his speech pattern. I hear my husband say, ‘Does my wife know I’m here?'”

No one in the Chanko family gave permission to film Mark Chanko’s treatment at NewYork-Presbyterian, but it made for great television.

“I saw my husband die before my eyes,” said Anita Chanko.

The Chanko family complained to the hospital and ABC, which agreed to remove Mark Chanko from future airings of the episode and the DVD.  However, according to the New York Times, the network did keep its promotion of Chanko’s physician, “Sebastian Schubl, a Dr. McDreamy-like young trauma surgeon, tries to save the day when a critically injured pedestrian struck by a vehicle is brought to the E.R.,” in a reference to a popular character on Grey’s Anatomy.

Chanko’s family did sue the hospital and ABC but the case was dismissed.  Mark Chanko, the defendants argued, lost any rights to privacy upon his death.  The family has asked to have the dismissal reviewed.

Meantime, a New York legislator wants to prohibit filming of a patient without consent.  State Assemblyman Ed Braunstein has proposed a bill to allow “a private right of action allowing patients and their families to sue for damages,” which currently is not permitted by New York State’s Patient’s Bill of Rights, according to ProPublica.

“It’s sad that someone would have to pass a law to prevent hospitals from allowing something that is so clearly morally wrong,” said Joel Geiderman, co-chair of the emergency medicine department at Cedars-Sinai Medical Center.

The bill would make exceptions for educational purposes and Dr. Baer agreed that there are ways to inform the public about health and medicine that would not conflict with patient care or privacy.

“By sharing our stories publicly or through social media, we can connect with audiences in ways that were never possible before,” said Dr. Baer. “We do not have to tell our stories by allowing reality television crews to hunt for and intrude on the most sacred moments between a patient and physician.”