Digital Dilemma For Medicine: How To Share Patient Records 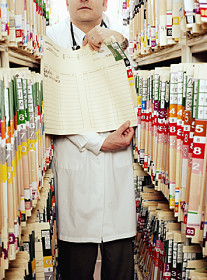 Technology entrepreneur Jonathan Bush says he was recently watching a patient move from a hospital to a nursing home. The patient’s information was in an electronic medical record, or EMR. And getting that record from the hospital to the nursing home, Bush says, wasn’t exactly drag and drop.

“These two guys then type — I kid you not — the printout from the brand new EMR into their EMR, so that their fax server can fax it to the bloody nursing home,” Bush says.

In an era when most industries easily share big, complicated digital files, health care still leans hard on paper printouts and fax machines. The American taxpayer has funded the installation of electronic records systems in hospitals and doctors’ offices – to the tune of $30 billion since 2009. While those systems are supposed to make health care better and more efficient, most of them can’t talk to each other.

Bush lays a lot of blame for that at the feet of this federal financing.

“I called it the ‘Cash for Clunkers’ bill,” he says. “It gave $30 billion to buy the very pre-internet systems that all of the doctors and hospitals had already looked at and rejected. And the vendors of those systems were about to die. And then they got put on life support by this bill that pays you billions of dollars, and didn’t get you any coordination of information!”

Bush’s assessment is colored by the fact that the company he runs — Watertown, Mass.-based athenahealth — stresses easily sharing electronic health records using the cloud. It also got a lot of the federal cash.

Dr. Robert Wachter, a hospitalist at the University of California, San Francisco, says sure — in hindsight, the government could have mandated that stimulus money be spent only on software that made sharing information easy. But, he says, “I think the right call was to get the systems in. Then to toggle to, ‘OK, now you have a computer, now you’re using it, you’re working out some of the kinks. The next thing we need to do is to be sure all these systems talk to each other.’ ”

Right now, the ability of the systems to converse is at about a 2 or 3 on a scale of zero to 10, Wachter and Bush agree.

Wachter is about to publish The Digital Doctor: Hope, Hype, and Harm at the Dawn of Medicine’s Computer Age, which assesses the value of information technology in health care. Up until now, he says, there has been a financial dis-incentive for doctors and hospitals to share information. For example, if a doctor doesn’t have a patient’s record immediately available, the doctor may order a test that has already been done – and can bill for that test. Keeping EMRs from talking to each other also makes it easier to keep patients from taking their medical records — and their business — to a competing doctor.

It’s time for that to change, says Dr. Karen DeSalvo, the federal government’s health IT coordinator. She is setting some standards for how to share digital information.

“The time of letting a thousand flowers bloom, and having a set of standards that are quite variable, should come to an end,” she says. “We should be working off the same set of standards.”

The billions of dollars a year the government pays out to doctors, hospitals and other institutions for patients enrolled in Medicare is a pretty good motivator. Already, Medicare is starting to increase pay to doctors and hospitals that work together to streamline care and avoid duplicative tests, and to penalize those that don’t. Winning the new payments and avoiding the penalties increasingly require proving that all of a patient’s doctors, no matter where they are, are working together. That means using electronic records that can seamlessly move from one system to the next.

Wachter says that consumers are now demanding better health information technology, too – “because we’re all used to our app stores and we know how magical it can be when core IT platforms invite in a number of apps.”

“So I think,” he says, “that even the vendors and healthcare delivery organizations that have been fighting interoperability recognize it’s the future.”

He says a lot of IT companies are now eager to come up with software that meets the demands of both the health care industry and consumers. About a dollar of every $6 in the U.S. economy is spent on health care. A new IT boom in that sector means there are billions of dollars to be made.

doctor electronic medical record EMR health records patient 2015-03-06
Physicians News
Share
Previous Teen Suicides by Hanging on the Rise; Docs Urged to Seek Signs
Next When One Spouse Exercises, the Other May Start, Too