Divorce May Be More Likely When Wives Get Sick 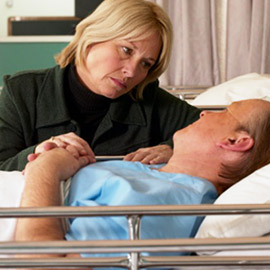 THURSDAY, March 5, 2015 (HealthDay News) — That part of the marriage vows where couples pledge to stay together “in sickness and in health” may be heeded more by wives than husbands, new research suggests.

Although divorce rates did not increase when husbands were in poor health, researchers at Iowa State University found the divorce rate was 6 percent higher in marriages in which wives were sick.

“There is a difference between feeling too sick to make dinner and needing someone to actually feed you. That’s something that can really change the dynamics within a marriage,” said study author Amelia Karraker in a university news release. She is an assistant professor of human development and family studies at Iowa State.

The researchers analyzed two decades of information on 2,700 marriages. At least one of the spouses was at least age 51 when the study began. The researchers looked to see whether cancer, heart disease, lung disease and stroke influenced divorce rates.

Of all the marriages included in the study, 32 percent ended in divorce. The researchers noted that they did not know which partner initiated the split.

They found that divorce was more common among younger couples. Although there were slight variations, the type of illness the couples faced didn’t significantly affect the findings.

It remains unclear exactly why divorce rates increase when wives are sick. The study authors noted that the healthy spouse must take on the role of primary caregiver and manager of the household.

Wives may be less satisfied with the quality of care provided by their husbands, who may have little experience as caregivers. Meanwhile, women may also be less comfortable than men in giving up their role as the primary caregiver in a relationship, the researchers added.

“Life or death experiences may cause people to re-evaluate what’s important in their lives,” Karraker said. “It could be that women are saying, ‘You’re doing a bad job of caring for me. I’m not happy with this,’ or ‘I wasn’t happy with the relationship to begin with, and I’d rather be alone than be in a bad marriage.'”

Although marriage can enhance people’s physical and mental health, married women who get sick are at greater risk of losing those benefits, previous studies have suggested.

“I think the research shows the potential vulnerabilities for people in society who are sick. There is an elevated risk for depression with illness, and now you’re also at risk for divorce,” Karraker said. “People in poor health may have less access to beneficial social relationships, which in turn can compromise their health further.”