Could a Dishwasher Raise Your Child’s Allergy, Asthma Risk? 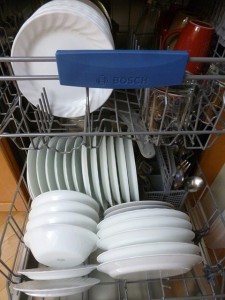 MONDAY, Feb. 23, 2015 (HealthDay News) — Hand washing dishes instead of using a machine to wash dishes may reduce children’s risk of developing allergic conditions, such as asthma or eczema, according to a new study.

These findings are the latest to lend support to the “hygiene hypothesis.” This theory suggests that early exposure to many different microbes may keep the immune system working properly. If the immune system is working well, the theory is that it won’t mistakenly go after harmless substances as happens in allergies.

“We have only tested an association between dishwashing methods and risk of allergy, but the findings fit well with the hygiene hypothesis. And there are studies showing that hand dishwashing very often is less effective than machine dishwashing in reducing bacterial content,” said lead author Dr. Bill Hesselmar, an associate professor of allergy at Queen Silvia Children’s Hospital in Gothenburg, Sweden.

However, he noted that due to the study’s design, they could not definitively show a cause-and-effect relationship between hand-washing dishes and the development of fewer allergic diseases.

The findings were published online Feb. 23 in the journal Pediatrics.

Hesselmar and his colleagues asked the parents of just over 1,000 Swedish children about their history of asthma, eczema and seasonal allergies. The children were 7 or 8 years old. The researchers also asked how the families cleaned their dishes. They also asked how often the families ate fermented foods and foods directly from a farm.

When calculating the effect these factors might have on a child’s allergy risk, the researchers made adjustments for a handful of other things believed to lower the risk of allergy disease, such as breast-feeding and owning pets.

About 12 percent of the families hand washed their dishes. The scientists found that children in these families had about half the risk of developing allergic conditions compared to kids in families that used dishwashing machines.

For example, among children in hand-dishwashing homes, 23 percent had eczema and 1.7 percent had asthma. That compared to 38 percent with eczema and 7.3 percent with asthma in homes that used a machine to clean dishes. A lower proportion of children in hand-dishwashing homes also had seasonal allergies, but the difference was not statistically significant, according to the study.

Children also tended to be less likely to have an allergic disease of any kind overall if they ate fermented foods or vegetables — such as sauerkraut or fermented cucumber — at least once a month, or food from a local farm, the researchers found.

“The results of this study are not surprising as there are multiple studies that show that exposures to the microbiome may reduce the risk of [allergic] diseases in certain populations,” said Dr. Selina Gierer, a pediatric allergist at The University of Kansas Hospital in Kansas City. “This is an example of when extra efforts to sanitize our environment, with machine dishwashing instead of hand washing, may reduce the natural exposure to microbes.”

Gierer pointed out that washing dishes by hand with non-antibacterial soap in lower temperatures may mean a family has more exposure to bacteria than they would with dishes washed in high-temperature sanitizing machines.

“If one is exposed to increased microbial exposure on the hand-washed dishes, then they may have less risk of allergy,” she said.

However, this link is just one possible piece of a much larger puzzle, Gierer suggested.

“This supports one aspect of the hygiene hypothesis, but there are many environmental and genetic factors that play a role in whether a patient will go on to develop an atopic [allergic] disorder,” Gierer said.

“The take-home message is that we should always consider the health benefits of reducing environmental microbial exposure to reduce infection when assessing the benefit of reducing allergy,” she said.

Learn more about preventing allergies and asthma from the American Academy of Allergy, Asthma and Immunology.