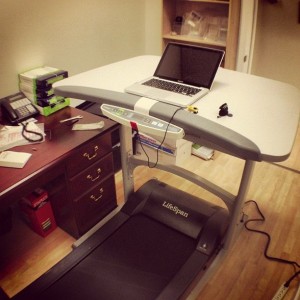 (HealthDay News) — With increasing evidence that sitting for long periods isn’t good for your waistline or your health in general, efforts have begun to focus on ways to shake up the traditional American workplace.

One such innovation that’s been touted as a possible solution is the treadmill desk. But a new study may dampen some of the enthusiasm about these devices. Researchers found that the desks are expensive, challenging to incorporate into an office setting, and may do little to boost meaningful activity levels.

“This is still a very green area of research and exploration in terms of identifying what works and how best to implement changes,” said study lead author John Schuna Jr. He is an assistant professor in the exercise and sport science program at Oregon State University (OSU) School of Biological and Population Health Sciences in Corvallis.

“These treadmills do get some employees to increase their light physical activity levels,” Schuna acknowledged. “But they can be pricey, they require physical space, and they don’t really promote the kind of sweating and shortness of breath that would come from intense activity, because it’s just not feasible to do that while working,” he said.

“So, they may help replace some of the overall drop in expended physical energy that we’ve seen in offices over the last 50 years. But they’re not going to be a replacement for getting the 150 minutes a week of moderate or vigorous activity that experts now recommend,” he added.

However, one exercise physiologist saw some benefit to the desks.

Jacque Crockford, an exercise physiologist and education specialist with the American Council on Exercise (ACE) in San Diego, stressed that “any physical activity is better than none, regardless of the intensity.”

Findings from the study were published recently in the Journal of Occupational and Environmental Medicine.

The American Heart Association recommends walking at least 10,000 steps a day. A mile equals roughly 2,000 steps. The AHA recommends getting extra steps wherever you can, including parking the car as far away from the office entrance as possible, using stairs rather than elevators, and taking walk breaks throughout the workday.

To see how much, or how little, treadmill desks might help advance this target in a real-world office environment, the study authors spent three months tracking use of the devices among 20 employees of a private health insurance company.

The goal was that employees would use the newly installed treadmills 90 minutes a day, spread across two sessions.

The reality didn’t match the goal, however. On average the employees used the treadmills once a day, for a total of just 45 minutes, the study found.

What’s more, the average speed was clocked at just under 2 mph, a velocity that investigators defined as “light” intensity, rather than the preferred moderate or vigorous activity that can lead to weight loss.

In the end, the treadmills added about 1,000 steps a day to participants’ activity levels. Not surprisingly, there was little change in either weight or body mass index (a measurement of body fat based on height and weight) by the end of the study.

“I wouldn’t say that I would not recommend this sort of thing for an office,” said Schuna. “But I think there are certainly logistical obstacles, and perhaps limited benefits, and it will depend on workplace to workplace whether it actually makes sense to implement.”

For her part, Crockford suggested that companies considering treadmill desks should do so as part of an overall wellness package that could include lunchtime walking groups, expert advice on fitness and diet, and prize incentives for physical activity participation.

“ACE does support the use of the 2008 Physical Activity Guidelines for Americans from the (U.S.) Department of Health and Human Services,” which recommends 150 minutes of moderate-intensity activity per week, Crockford said.

“But for many people, implementing five days of 30 minutes of activity can be a daunting task if they have been previously sedentary. Therefore, implementing tools like standup treadmill desks for employees, who otherwise would spend a majority of their days seated (or) inactive, can serve as a catalyst for change and improved health over the long term,” she said.

Lowe noted that study participants had to share the use of treadmill desks, and had to schedule their treadmill time in advance. In addition, the computers attached to the treadmills were shared computers, and only two treadmill workstations were equipped with phones.

“The OSU study restricted its subjects’ treadmill desk usage to such a degree, the subjects never had an opportunity to reach the daily step count recommended by the American Heart Association for maintaining good health,” Lowe said. “If the subjects were prevented from walking on the treadmill desks, how could they have been expected to statistically improve their condition? We continue to stand by the many benefits of walking while working.” 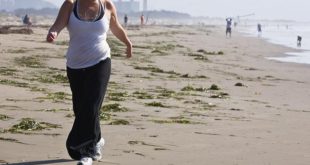