Antibiotics May Lead to Digestive Complication in Infants 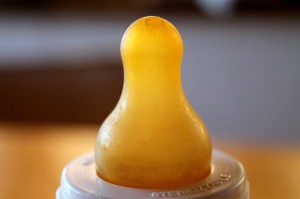 “Ingestion of oral azithromycin and erythromycin places young infants at increased the risk of developing [pyloric stenosis],” wrote the study authors, from the Uniformed Services University of the Health Sciences, in Bethesda, Md. “This association is strongest if the exposure occurred in the first two weeks of life, but persists, although to a lesser degree, in children between 2 and 6 weeks of age.”

However, it’s important to note that the study was only designed to find an association between the use of these antibiotics and an increased risk of pyloric stenosis; it couldn’t show a cause-and-effect link.

The findings were published online Feb. 16 in the journal Pediatrics.

“Pyloric stenosis isn’t what I would call dangerous in this day and age, and in an area where competent surgical care is available,” said Dr. Clay Jones, a pediatrician specializing in newborns at Newton-Wellesley Hospital in Newton, Mass. “Historically, it would have been a death sentence, but now it is typically diagnosed in the early stages and treated before it puts the baby at risk.”

In the study, the researchers analyzed the records of just over 1 million children and compared those who received erythromycin or azithromycin in their first three months to those who didn’t.

The overall risk of pyloric stenosis was small — occurring in slightly more than two babies per 1,000, the researchers reported.

The study found that the use of erythromycin was associated with a 13 times higher increased risk of pyloric stenosis in the first two weeks of life, and a four times higher risk when used between the ages of 2 weeks and 6 weeks.

Both erythromycin and azithromycin increase activity in the digestive tract, which might cause the opening between the stomach and small intestine to narrow, the study authors suggested.

Jones expressed concern that the findings might overestimate the risk of pyloric stenosis because of the small number of overall cases and how subjective the diagnosis can be.

“Their results came down to three cases of about 150 after a child less than 2 weeks of age was given the drug,” Jones said. “If one of the cases in the study was overcalled, the effect disappears. It may be real, but it is clearly less of a risk than erythromycin, and it may not be real.”

Pyloric stenosis is typically diagnosed through ultrasound, and determining the condition accurately can depend on who is reading the ultrasound, Jones explained.

The most common uses for azithromycin are to treat whooping cough — a vaccine-preventable disease — or to treat a Chlamydia infection contracted from a mother during birth, according to Jones.

Not every infection needs treatment with these antibiotics, however.

“Azithromycin is not the first-line medication for almost every bacterial infection for a child less than 6 weeks old,” said Dr. Michael Lewis, medical director of Pediatric Inpatient Unit at the University of Kansas Hospital. “Most infections in a child less than 6 weeks of age that require an antibiotic will be treated with a penicillin or cephalosporin family antibiotic.”

However, Jones said azithromycin would likely still be the drug of first choice for some infections, such as whooping cough or chlamydia. “There aren’t good alternatives,” he noted.

If one of these antibiotics needs to be given to an infant, parents should be made aware of the risk of pyloric stenosis and alerted to the potential symptoms, Jones said. Aside from projectile vomiting, other symptoms include fever, smaller stools or constipation, increasing tiredness (from dehydration), failure to gain weight, sunken eyes, wrinkled skin or a sunken “soft spot” on a baby’s head.

“It’s always okay and encouraged for a parent to ask their child’s physician if antibiotics are truly necessary. Too many prescriptions for them are written without a good indication,” Jones said. “But the reasons for the use of these particular drugs in the first few weeks of life are clear and rarely a ‘wait-and-see’ situation, as with ear infections and colds.”