Breaking News
Home / Headlines / Is The Measles Virus Back For Good? 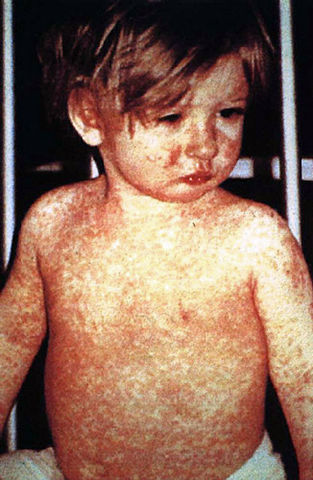 (HealthDay News) — Is measles really back?

That’s the question vexing everyone from pediatricians to policymakers to parents as the outbreak of the dangerous childhood disease that was declared eliminated from the United States 15 years ago continues to spread.

There are now 121 cases in 17 states and the District of Columbia, federal health officials reported Monday. At this rate, total infections for 2015 would produce numbers not seen in more than a decade.

The initial cases that first surfaced at two Disney theme parks in southern California in December were likely transmitted by a foreign visitor or a U.S. resident returning from abroad. But, the disease continues to spread, particularly in communities with clusters of parents who’ve chosen not to vaccinate their children for religious or personal reasons.

“It’s going like wildfire,” said Dr. Carol Baker, executive director of the Center for Vaccine Awareness and Research at Texas Children’s Hospital in Houston. “Measles is a really terrible disease. You have fever for a week, your eyes hurt so bad you have to stay in a dark room, and you don’t even ask to go outside and play because you’re so sick, even if you have uncomplicated measles.”

Baker said she’s particularly concerned because the new strain of measles is more infectious than many past strains. With a typical measles strain, one person passes the disease on to 12 to 18 others, but with this one, a single infected person can infect almost 30 people, she said.

“The California health department officials are really worried about ‘the new normal’ with this strain and their pockets of unvaccinated individuals,” Baker said. “This is a problem we should not be having, but we are.”

Many parents are responding to the outbreak by making sure their children are protected with the MMR (measles-mumps-rubella) vaccine.

“Here in Los Angeles, we have had a huge increase in parents bringing their children in for the MMR, both to get caught up or to get an earlier second dose,” said Dr. Cigal Shaham, a pediatrician at Roxbury Pediatrics and attending physician at Cedars-Sinai Medical Center in Los Angeles. She said her center is also receiving at least 20 extra phone calls a day from parents asking about measles and the vaccine.

Baker said Texas Children’s Hospital also has received a lot of calls from parents wanting to make sure their kids are up-to-date on their vaccines. Most want their children to get a second dose of the MMR vaccine — which brings the vaccine’s effectiveness against measles from 95 percent to 99 percent. But adults are also deciding to get a booster shot if they might be traveling abroad, she said.

All but 2 states allow vaccine exemptions for religious reasons

Much of the national conversation on the measles outbreak has focused on parents who have declined to vaccinate their children against the disease because they have safety concerns about the vaccine. There are no guarantees that it — or any vaccine — is 100 percent safe, these parents contend.

Critics of such decisions argue that unvaccinated children pose a threat to children with weakened immune systems and babies too young to receive the vaccine.

Maggie and Eli Jacks are siblings who were exposed to measles at an Arizona health clinic during a routine blood draw for Maggie, who is undergoing treatment for acute lymphoblastic leukemia.

Eli is 10 months old — too young to receive the MMR vaccine. And Maggie, though fully vaccinated, can’t receive live vaccines, such as the MMR, and can’t fight off infections while her immune system is weakened during cancer treatment. Both had to receive multiple shots of rubeola immune globulin — or measles antibodies — with the hope that that will be enough to prevent infection.

“Any fever requires an ER visit and possible admission, and any illness is potentially very serious. Thus, we are very careful,” said Maggie’s father, Dr. Tim Jacks, a pediatrician at Gilbert Pediatrics in Mesa, Ariz.

“Parents must realize that their actions affect everyone around them,” he said. “In my experience, most parents do not consider those too young or too medically fragile when making decisions regarding vaccinations. The issue is one of personal as well as social responsibility.”

Jacks said that, as a pediatrician, he has heard and responded to just about any reason imaginable not to vaccinate. “Pretty much every excuse boils down to fear, ignorance and bad information,” he said.

Health care providers say the challenge is to find ways to counter that fear and inaccurate information about vaccines.

“It’s very hard for me to realize that a large number of parents don’t trust me and my advice, and that’s very different than how I grew up in medicine,” Baker said. “The overwhelming majority of people are going to vaccinate their child. But you have vaccine refusers, a number approaching 2 percent, who have an ideology that vaccines are bad, and you’re not going to change their minds.”

She said parents’ concerns about vaccines all boil down to safety. But once a health-care professional answers their questions and addresses those concerns, the average parent will vaccinate their child, she added.

Safety concerns range from worries about autism — a result of a fraudulent study by a former British doctor that has since been debunked many times — to concerns about vaccine ingredients. Or that too many vaccines early in a child’s life will “overwhelm” his or her system. Once told that babies’ immune systems already fight off far more bacteria and viruses than the ingredients in vaccines, and that vaccine ingredients aren’t harmful, most parents choose to have their children vaccinated, Baker said.

Still, many parents seek exemptions that allow their children to attend public school without the required immunizations. All but two states allow religious exemptions, and 20 states allow philosophical or personal belief exemptions.

For one skeptical mother, ‘one-size-fits-all medicine’ isn’t the answer

Whether such exemptions should be allowed appears to depend on the age of the person asked. A recent Pew survey found that 37 percent of adults under age 50 say parents should be able to decide not to vaccinate their children, compared with 22 percent of those aged 50 and older.

Overall, the survey found that 68 percent of adults believe the measles vaccine should be mandatory, a position endorsed by 86 percent of scientists.

“I’m a big proponent of freedom of choice. But when it comes to the social contract, we need to be considerate to public health and responsible for those around us who might not respond to the vaccine because of an underlying health condition,” Baker said.

Tara Norman, of Montgomery County, Maryland, started vaccinating her two children according to the U.S. Centers for Disease Control and Prevention’s recommended schedule. But she stopped when she began investigating concerns related to her family’s health. She also said she finds the schedule “overwhelming.”

“I guess the only reason I continued is I’m not a selfish person, and they made me feel like I was selfish if I didn’t continue,” said Norman, explaining why she originally had her children vaccinated. “I think I just wanted to please my pediatrician and not want her to think I was crazy.”

Norman said she had seizures as a child around the same time she received the older pertussis (whooping cough) vaccine. And one of her two sons has tics, similar to Tourette’s syndrome, which she said began after he had received vaccines.

“Can I 100-percent prove that happened from the vaccines? No, I can’t,” Norman said. “But with one-size-fits-all medicine, you are going to have people with bad reactions. I understand there are children too young to be vaccinated or are immunosuppressed, but they’re as likely a carrier of the disease as another child. I don’t think all these unvaccinated kids are Typhoid Marys, and I do understand that if there’s an outbreak, I have to keep my kid home.”

According to the CDC, the most common reactions to the MMR vaccine are a fever and a mild rash. Approximately 1 in 3,000 children may experience a seizure caused by fever, but these seizures have been shown not to cause long-term harm, the agency said.

Some pediatricians have gone so far as to decide they won’t care for children whose parents choose to skip vaccines.

“In 2013 when pertussis [whooping cough] went through my practice area, I decided to stop seeing electively non-vaccinating families when an older unvaccinated child came into my waiting room coughing to the point of turning blue and retching,” said Dr. Christopher Hickie, a pediatrician at Cottonwood Pediatrics in Tucson, Ariz.

“Thankfully my waiting room was not crowded and no infants were present. But the episode helped me to realize that spread of vaccine-preventable diseases via my waiting room is much more likely to happen if there are electively non-vaccinating families in my practice,” Hickie said.

Officially, a policy statement from the American Academy of Pediatrics urges pediatricians not to “discharge patients from their practices solely because a parent refuses to immunize a child.” But carrying out that policy in practice presents challenges, say doctors who care for children.

“This is an issue many practicing pediatricians struggle with,” said Dr. Roy Benaroch, a pediatrician at Pediatric Physicians in Alpharetta, Ga. “We know that if we refuse to care for non-vaccinated children, or children with ‘spaced out’ or ‘alternative schedules,’ we’ll drive these kids further away from good medical care.”

At the same time, Benaroch said, pediatricians must balance the choice of some parents not to vaccinate their children against the health of more vulnerable patients.

“All of us see a great number of special needs kids — babies too young to vaccinate and kids with health issues that prevent vaccines. We’ve got pregnant women and premature babies in our waiting rooms,” Benaroch said. “We need to do everything we can to ensure the safety of all of our families, and we know that unvaccinated kids in the waiting room mean more potential for exposures.”

Measles can also come with a financial cost to the public, experts say.

“The costs to others from measles are quite high,” said health economist Adam Powell, president of Payer+Provider Syndicate Healthcare Consulting. He said estimates for the public cost of a single measles case exceeds $10,300, and placing an infant too young to be vaccinated in quarantine for three weeks costs an estimated $775 per child.

“The number of contacts a person with measles may have can vary wildly,” Powell said. “Among the 2011 measles outbreaks in the United States, average contacts per case ranged from 3 to 1,714. Each contact has been shown to cost local and state governments between $100 and $546.”

Something about the current measles outbreak may be altering the public consciousness, suggested Dr. Paul Offit, director of the Vaccine Education Center and a professor of pediatrics in the division of infectious diseases at The Children’s Hospital of Philadelphia.

“This Disney outbreak is the tipping point. It’s different,” Offit said. “Last year we had more than 600 cases, so why has the Disney outbreak led to this bigger response? I think the answer is where it happened. It’s Disneyland, fantasyland, and the contrast to that is this potentially fatal disease.”