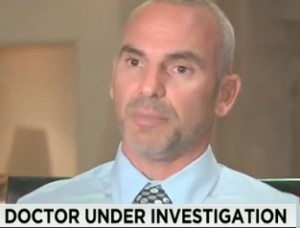 An anti-vaccine family goes to Disneyland. They get the measles, go to a clinic in Arizona and infect a clinic employee who proceeds to expose the disease to 195 children.  That’s how quickly measles spreads.

One of those children exposed to measles at the Arizona clinic was Eli Jacks, who is 10 months old and too young for the first MMR vaccine, which is given at 12 months.  His parents are not only concerned for his health, but also for their 3-year-old daughter Maggie, who has leukemia.  Any active vaccine was likely wiped out when Maggie received chemotherapy.

“My biggest fear is that I’ll lose my child,” Anna Jacks, mother of Maggie and Eli, told CNN. “My family has been through enough with cancer. I don’t want her to go through anything else.”

A nearby cardiologist, unrelated to the Jacks’ exposure, refuses to vaccinate his children and was unsympathetic and defensive when CNN asked about how his decisions may directly affect the health of the surrounding community and kids like Maggie and Eli.

“It’s unfortunate that people die but, unfortunately, people die,” said Dr. Jack Wolfson.  “I’m not going to put my children at risk to save another child.”

Dr. Wolfson is part of a minority of anti-vaccinators who believe that the MMR vaccine is toxic and leads to other diseases like autism — a claim now known in the medical and scientific communities to be false.

“It’s not my responsibility to be protecting their child,” said the physician, who was obviously absent on Hippocratic-oath day at medical school. “If a child is so vulnerable like that, they shouldn’t be going out into society,” he said in reference to kids with cancer or those under 12 months old.

Dr. Wolfson is now under investigation by an Arizona medical board. The Arizona Board of Osteopathic Examiners confirmed Thursday that it is investigating complaints made against Dr. Wolfson.