Some Kids Use Tobacco, E-Cigarettes Together, Study Finds 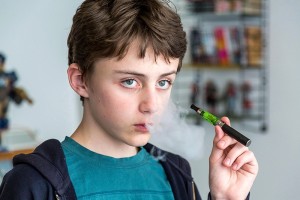 MONDAY, Feb. 2, 2015 (HealthDay News) — American children and teens who smoke may also use a variety of other nicotine delivery systems, including e-cigarettes, cigars, smokeless tobacco, hookahs and pipes, a new study finds.

“We are concerned about this because of the potential for increased harms associated with the use of multiple products, such as exposing young people to nicotine during a time when their brains are still developing or risk for nicotine addiction,” said lead researcher Youn Ok Lee, a research public health analyst at RTI International in Research Triangle Park, N.C.

Public health experts are also concerned that these products could attract kids who might not otherwise use cigarettes or tobacco products, she said.

For the study, Lee’s team collected data on almost 25,000 students between 9 and 18 years old who took part in the 2012 National Youth Tobacco Survey. In addition to cigarettes, the researchers looked at the use of e-cigarettes, cigars, smokeless tobacco, hookahs, pipes, bidis (small imported cigarettes), kreteks (cigarettes blended with cloves or other flavors), snus (a type of smokeless tobacco) and dissolvable tobacco.

In addition, twice as many kids used e-cigarettes alone than kids who used them along with cigarettes, the researchers found.

Children who used several nicotine delivery devices were more likely to be boys, the study found. Kids using multiple devices also were more likely to use flavored products, to be addicted to nicotine, and to be influenced by advertising and susceptible to peer pressure, the researchers said.

“Our results also suggest that policymakers should look more closely at the potential influence of flavors and company marketing on kids’ use of multiple products. Researchers have looked at these issues when it comes to cigarettes, but less is known about them when it comes to non-cigarette products,” Lee said.

The report was published online Feb. 2 in Pediatrics.

Dr. Norman Edelman, a senior consultant for scientific affairs for the American Lung Association, said, “This is an important article as it makes a good case for regulations which make nicotine delivery devices such as e-cigarettes unavailable to children.”

The study points out that very often these devices are being used in addition to cigarettes and not as substitutes, Edelman said. “Thus, no so-called harm reduction is going on, but enhanced addiction to nicotine among our youth is taking place,” he said.

Flavoring these products is especially egregious as this practice has already been banned in cigarettes, because it’s “a direct and blatant attempt to sell to minors,” he said.

“The American Lung Association has been urging the U.S. Food and Drug Administration to develop regulations for nicotine delivery devices like e-cigarettes. Among other things, this would protect our children from being harmed by them. The agency announced an intent to do so a while ago,” Edelman said.

In 2014, the FDA proposed a new rule that would allow the agency to regulate e-cigarettes.

For more information on youth and tobacco, visit the U.S. National Library of Medicine.