California Campaigns To Curb E-Cigarette Use 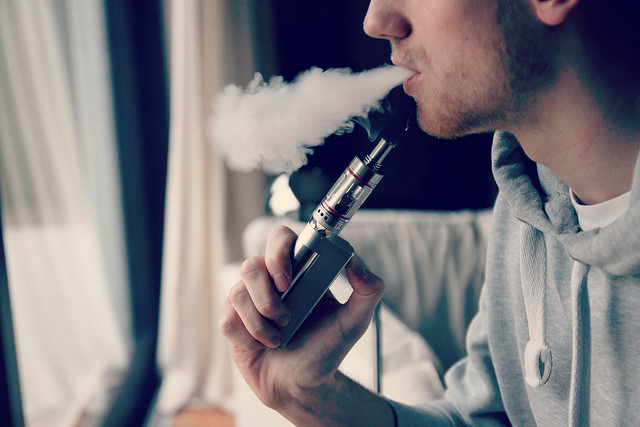 As the popularity of electronic cigarettes continues to grow, California’s top public health official warned residents Wednesday about their dangers and announced a new campaign to reduce their use.

Dr. Ron Chapman, director of the California Department of Public Health, said he feared that the increased use of e-cigarettes could chip away at the gains California has made in reducing smoking rates and changing the culture of smoking. The state has the second-lowest adult smoking rate in the nation, he said.

“E-cigarettes represent a new public health challenge that threatens to undo and reverse the progress we’ve made by re-normalizing smoking behavior and tempting a new generation of youth and young adults into the cycle of nicotine addiction,” he said during a call with reporters.

Chapman warned residents that electronic cigarettes emit an aerosol that contains at least 10 chemicals – including formaldehyde and lead — known to cause cancer or birth defects. He also emphasized the health effects and addictive nature of nicotine, which is in the liquid used in e-cigarettes.

The health department issued a report Wednesday detailing the concerns and is planning an advertising campaign to educate consumers. The department also plans to work with health providers, child care centers and schools to raise awareness about the devices.

Regulatory efforts are also underway in California and the rest of the country to limit the harms of e-cigarettes. A state senator proposed legislation this week that would define e-cigarettes as tobacco products and would ban people from using them in bars, hospitals, restaurants and other locations that already prohibit traditional smoking. New Jersey, Utah and North Dakota already have similar restrictions.

“Like traditional cigarettes, e-cigarettes deliver nicotine in a cloud of toxic chemicals, and their use should be restricted equally under state law,” Sen. Mark Leno said in a statement.

The U.S. Food and Drug Administration has taken steps to increase regulation. And dozens of cities and counties around the state have passed ordinances over the past few years restricting “vaping,” as e-smoking is known.  At the same time, however, the number of stores in California that sell the devices and liquids quadrupled between 2011 and 2013.

The American Vaping Association, which advocates on behalf of such stores, argues that e-cigarettes are an effective smoking cessation tool and that California’s public health officials are sending an irresponsible message to adult smokers by telling them to avoid e-cigarettes.

“It’s appalling,” said Gregory Conley, president of the association. “It is going to lead to continued smoking.”

Chapman said e-cigarettes are not FDA-approved cessation aids, however, and that people should call the quit line (1-800-NO-BUTTS) if they want help to stop smoking.

Health officials are particularly concerned about the marketing of e-cigarettes to young users through cartoon characters and flavored liquids including chocolate, cotton candy and bubble gum. Data on 430,000 California middle and high school students showed that in 2013, about 6 percent  of 7th graders, 12 percent  of 9th graders and 14 percent of 11th graders had used e-cigarettes in the previous 30 days.

The state has seen a “staggering” increase in use among young adults ages 18 to 29, Chapman said. Between 2012 and 2013, e-cigarette use jumped from 2.3% to 7.6% among this age group.  Nearly one in five of young adult users have never smoked conventional cigarettes, suggesting that those who otherwise might never have never smoked are picking up the electronic devices.

In addition, California poison control centers are receiving more calls of accidental e-cigarette poisoning. The number of calls involving children five and under jumped from 7 in 2012 to 154 two years later. Part of that is due to the lack of child-resistant caps and the potency of the liquid, which may accidentally be ingested or come into contact with the child’s eyes or skin, according to the state report.

“It actually may be more dangerous to have these around the household than conventional cigarettes,” said Cyrus Rangan, a physician with the California Poison Control System.