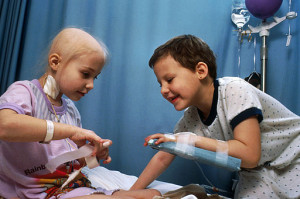 Pediatric oncology can be one of the most emotionally draining specialties for doctors and health care providers.  On one hand, the sight of a child cured of cancer can create an exhilarating high and validation of the job.  But on the other hand, losing a child to cancer — even when it’s not your own family — can be devastating.

Abby R. Rosenberg is a pediatric oncologist at Seattle Children’s Hospital.  She had too often seen families experience those highs and lows that go along with their child’s cancer treatment.  She had seen entire communities mourn the loss of a neighborhood friend as they “sustain each other, supporting, bolstering, and protecting from within,” she said.

But Dr. Rosenberg had always been one step removed from these emotions.  Until now.

Dr. Rosenberg wrote in the current JAMA: Pediatrics of a recently admitted patient whose “presenting sign was a devastating intracranial bleed, and his prognosis for neurologic recovery was dismal.” That patient turned out to be a close friend of Dr. Rosenberg’s fourth grade son, who asked of his friend, “Will he die?”

“As a clinician, I pride myself in my honesty and willingness to answer hard questions,” said Dr. Rosenberg. “But as a mother, I couldn’t find the courage. I didn’t know how to say the words to my own child.” She continued:

The patient died the following day.

“That night, I held my son while he (and I) cried,” she said. “I confess I don’t really know how the next part of moving on goes, but I take cues from my son. He has started to recall silly jokes his friend would tell, shared accomplishments, simple moments of friendship. He holds on to those. And I watch from the inside now, with both guilt-tinged relief and gratitude.”