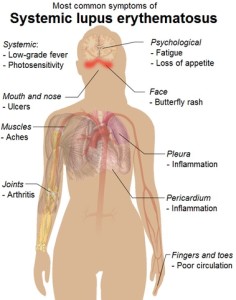 THURSDAY, Jan. 15, 2015 (HealthDay News) — Asian and Hispanic lupus patients in the United States have lower death rates than whites, blacks or Native Americans with the disease, a new study reveals.

Lupus is an autoimmune disease that causes joint and organ damage. Autoimmune disorders mean the body’s immune system attacks healthy body tissue by mistake, according to the U.S. National Library of Medicine.

“While previous research has examined racial differences among lupus patients, the studies have primarily been based at academic research centers,” said lead author Dr. Jose Gomez-Puerta, of Brigham and Women’s Hospital in Boston. “Our study investigates the variation in death rates due to lupus among different ethnic groups in a general clinical setting.”

Researchers reviewed Medicaid claims filed by more than 42,200 lupus patients, aged 18 to 65, between 2000 and 2006. Of those patients, nearly 8,200 had kidney inflammation caused by lupus (lupus nephritis).

Hispanic and Asian lupus patients had the lowest death rates, according to the study published Jan. 15 in the journal Arthritis & Rheumatology. The annual death rate was highest among Native Americans, blacks and whites, in that order.

“In less than three years of follow-up of Medicaid patients with lupus, we found a great disparity in mortality [death] rates among ethnic groups. Understanding the variation of death among the races is important to determine how best to treat individual patients, modify risk factors, and ultimately improve survival for those with lupus,” Gomez-Puerta said in a journal news release.

The U.S. National Institute of Arthritis and Musculoskeletal and Skin Diseases has more about lupus.