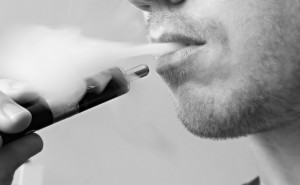 (HealthDay News) — Vapor from electronic cigarettes may increase young people’s risk of respiratory infections, whether or not it contains nicotine, a new laboratory study has found.

Lung tissue samples from deceased children appeared to suffer damage when exposed to e-cigarette vapor in the laboratory, researchers reported in a recent issue of the journal PLOS One.

The vapor triggered a strong immune response in epithelial cells, which are cells that line the inside of the lung and protect the organ from harm, said lead author Dr. Qun Wu, a lung disease researcher at National Jewish Health in Denver.

Once exposed to e-cigarette vapor, these cells also became more susceptible to infection by rhinovirus, the virus that’s the predominant cause of the common cold, the researchers found.

“Epithelial cells are the first line of defense in our airways,” Wu said. “They protect our bodies from anything dangerous we might inhale. Even without nicotine, this liquid can hurt your epithelial defense system and you will be more likely to get sick.”

The new report comes amid a surge in the popularity of e-cigarettes, which are being promoted by manufacturers as a safer alternative to traditional tobacco cigarettes and a possible smoking-cessation aid.

For the study, researchers obtained respiratory system tissue from children aged 8 to 10 who had passed away and donated their organs to medical science. Researchers specifically looked for tissue from young donors because they wanted to focus on the effects of e-cigarettes on kids, Wu said.

The human cells were placed in a sterile container at one end of a machine, with an e-cigarette at the other end. The machine applied suction to the e-cigarette to simulate the act of using the device, with the vapors produced by that suction traveling through tubes to the container holding the human cells.

The exposed lung tissue also appeared more susceptible to the common cold virus, developing higher amounts of virus compared to healthy cells that had not been exposed to the vapor, the investigators found.

In follow-up testing, lab mice exposed to e-cigarette vapor also appeared more likely to come down with a cold from rhinovirus, compared with unexposed mice.

The American Vaping Association, an industry group representing e-cigarette makers, said the study findings were limited because the tests involved cells in a laboratory, not actual people using e-cigarettes. The tests also failed to compare the effects of the vapor to other inhalants, the group said.

“Many in public health agree that the risks of vaping must always be considered in the context of the risks of cigarette smoking and traditional stop-smoking therapies,” said Gregory Conley, president of the American Vaping Association.

“Unlike past studies, this study provides the reader with no data to compare the liquid results to. What would happen if these same cells were exposed to combustible cigarettes, nicotine gum, or the smoking cessation drug varenicline [Chantix]? That is an important — and unanswered — question that the authors don’t appear to have great interest in answering,” Conley said.

At the same time, Edelman said the study findings are “interesting and provocative,” and fit in with prior research on the effects of e-cigarette use.

“We already know that if you have someone smoke an e-cigarette and then test them, they show airway inflammation,” Edelman said. “The susceptibility to viral infection is brand new and interesting.”

On Thursday, two groups representing cancer researchers and specialists said the potential health hazards of e-cigarettes remain unclear, and more regulation on their use is needed.

The American Association for Cancer Research and the American Society of Clinical Oncology together issued a list of recommendations aimed at bringing e-cigarette regulations more in line with those of traditional cigarettes.

To learn more about e-cigarettes, visit the U.S. National Institutes of Health.