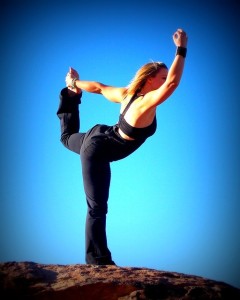 TUESDAY, Dec. 16, 2014 (HealthDay News) — Yoga has long been believed to improve overall health, but a growing body of evidence shows the ancient practice may also help the heart, a new review finds.

In fact, the benefits were similar to those of conventional exercise such as brisk walking, said lead researcher Paula Chu, a doctoral candidate at Harvard University’s Health Policy Program in Boston.

The review, of 37 clinical trials, found that people randomly assigned to take yoga classes saw improvements in their weight, blood pressure and cholesterol.

“This finding suggests that [people] who are physically limited in some way do not have to ‘pound the pavement’ in order to improve their cardiovascular risk profile,” Chu said.

Still, studies so far have varied in quality and been relatively small and short-term, Chu’s team reports in the Dec. 16 issue of the European Journal of Preventive Cardiology.

“We believe there is promising evidence on the effect of yoga on improving cardiovascular risk factors,” Chu said. But given the limitations of the research, she added, “we refrain from drawing any definitive conclusions.”

One complicating issue is there are many different types of yoga, ranging from gentle stretching and breath work to more vigorous workouts that require a good deal of strength and flexibility.

The trials in the review varied in the types of yoga tested — as well as the frequency of classes and the people involved. Some studies included healthy people in their 20s, while others focused on older adults or people with heart risk factors like high blood pressure.

So it’s not clear whether any one type of yoga is better than others, or how often people need to practice the discipline to see benefits, according to the researchers.

But in general, Chu said, yoga was “well-accepted” by old and young alike, and offered cardiovascular benefits regardless of age.

A cardiologist who reviewed the study said the findings are encouraging.

“This shows that yoga does have cardiovascular benefits,” said Dr. Lawrence Phillips, an assistant professor of medicine at NYU Langone Medical Center in New York City.

But Phillips said he wouldn’t go so far as to say yoga is as good as brisk walking, biking or other conventional forms of exercise that have been better studied.

“And I wouldn’t want people to think that yoga, or any form of exercise, takes the place of any medications they need,” Phillips stressed.

That said, he noted that yoga can do more than get the body moving; it’s a “mind-body” practice that can also help with reducing stress and calming the nervous system.

According to Chu’s team, those nervous system effects could be one reason why yoga has cardiovascular benefits.

If people are interested in yoga for improving their health, it could be worth a shot, Chu said.

“Of course,” she added, “not all types of yoga are suitable for every population. Individuals may want to consult their doctor before embarking on an exercise plan, or talk to a professional about the right style of yoga for them.”

Phillips agreed that people should know what they’re getting into before taking a yoga class — especially if they have physical limitations or medical conditions. And even relatively healthy people would be wise to start at the beginning.

“Make sure you’re going to a beginner’s class, and tell the people at the center that you’re new to yoga,” Phillips said. “And remember that you don’t have to do everything that’s offered in the class.”

As for cost, a class at a yoga center can run $15 to $20, or more. But, Phillips noted, as yoga grows more and more popular, lower-cost options are becoming available — including at senior centers, hospitals and other venues.

The American Heart Association has more on yoga and heart health.