Mom, Put Down That Smartphone at Dinner 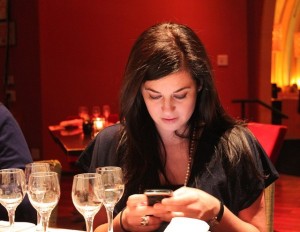 FRIDAY, Dec. 12, 2014 (HealthDay News) — Harried mothers who want to stay close with their kids should put aside their smartphones and tablets at the dinner table, a new study suggests.

Researchers found that mothers who are regularly distracted by mobile devices at mealtimes fare worse at connecting with their children.

The reason? Mealtime exchanges between parent and child decreased because, “the mother’s gaze and/or attention was directed at a device,” study co-author Dr. Jenny Radesky, clinical instructor in developmental-behavioral pediatrics at Boston University School of Medicine, said in a university news release.

Overall, Radesky’s team found that the use of cellphones and other devices during meals was tied with 20 percent fewer verbal and 39 percent fewer nonverbal interactions with their children.

Mothers with the highest use of mobile devices during meals were also much less likely to provide “encouragement” to their children, according to the study published online this week in the journal Academic Pediatrics.

Experts weren’t surprised by the findings.

“This study documents what we clearly see to be true — that is, that everyone is connected to an electronic interface way too much and ignoring real-time human relations,” said Dr. Ron Marino, associate chair of pediatrics at Winthrop-University Hospital in Mineola, N.Y.

“Children must have the emotional, physical and verbal presence of a loving caretaker,” he added. “When a mother is distracted by electronic media, the opportunities to develop language and social cognition are diminished or lost.”

Dr. Andrew Adesman is chief of developmental and behavioral pediatrics at Cohen Children’s Medical Center of New York, in New Hyde Park, N.Y. He said that, “just as we would not want parents intermittently reading a newspaper or glimpsing a TV program during family meals, parents should make a conscious effort to put away their mobile devices during mealtime. Most text messages and e-mails can wait the 20 minutes or so that families spend together at the dinner table.”

The study involved 225 mother-and-child pairs, all from low-income households. Radesky’s team videotaped the mom/child pairs when the kids were 6 years old, in a setting where the children were being presented with unfamiliar foods at the family dinner table.

According to the researchers, being introduced to new foods can be stressful for young children, but mothers who used mobile devices had 26 percent fewer verbal and 48 percent fewer nonverbal interactions with their youngsters during meals that featured the new foods.

This suggests that these mothers were less “available” to help their children through this new experience, Radesky’s team said.

“Although this study looked at low-income families in an experimental setting, there is no reason to think that these findings don’t reflect what goes in households across America during family meals at dinnertime,” Adesman said.

“Common sense suggests that parents should make a concerted effort to be ‘device-free’ during family dinners,” he added. “This will likely not only have immediate benefits on the family unit, but it will also set a positive example for children since it will just be a matter of time before these kids as teens likewise have mobile devices with their potential to distract.”

The American Academy of Pediatrics offers tips for effective parenting.