Routine Ultrasound for Dense Breasts May Not Be Worth Cost 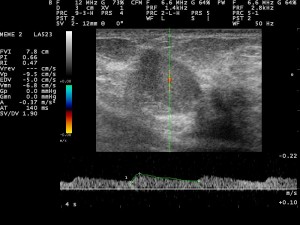 TUESDAY, Dec. 9, 2014 (HealthDay News) — New research questions the value of ultrasound screening for women with dense breasts who’ve had a normal mammogram. The study was published in the Dec. 9 issue of the Annals of Internal Medicine.

Brian Sprague, Ph.D., assistant professor of surgery at the University of Vermont in Burlington, and colleagues used a computer-based simulation model to look at three scenarios. In one, women received routine mammograms only. In the second, women with category 4 breast density received a mammogram and an ultrasound. In the third scenario, categories 3 and 4 were grouped together. Using information from breast cancer surveillance databases, the researchers looked at how many breast cancer deaths could likely be prevented by adding ultrasound and how many biopsies would occur after a false-positive ultrasound.

Performing supplemental ultrasound after normal mammograms on 10,000 women with dense breasts, ages 50 to 74, every year would prevent about four breast cancer deaths, Sprague told HealthDay. “At the same time, 3,500 of those women would have had to have a biopsy,” he said, with no cancer detected. Sprague’s team then calculated how many years of good quality life the extra testing would yield. For each woman, it came down to about 10 hours, he said. When women with densities of 3 and 4 were considered together, the cost-effectiveness ratio was $325,000 for each year of healthy life gained.

In the United States, at least 19 states require doctors to notify women of their breast density after undergoing a mammogram, according to background information in the study. Those with dense breasts may then be advised to talk to their doctor about supplemental testing. Legislation mandating such notification nationwide is also under consideration.

Full Text (subscription or payment may be required)