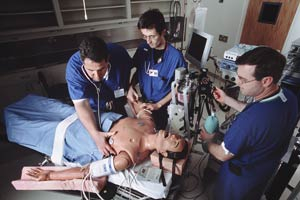 In 2011, the Accreditation Council for Graduate Medical Education (ACGME) set new restrictions on work hours for medical residents to satisfy a call to reduce possible medical errors due to fatigue.  Two new studies have found no differences in mortality or readmission rates since the new rules went into effect.

The ACGME first enacted resident duty restrictions in 2003 requiring residents to: work 80 hours or less per week over a 4 week period; have 1 day free per week averaged over 4 weeks; have 10 hours off between shifts; not work more than 24 hours of continuous duty with 6 hours allowed for transfer of care activities; and take call no more than every third night averaged over 4 weeks.

“These reforms have been met with mixed opinions,” said the authors of one study led by Ravi Rajaram, MD of the Feinberg School of Medicine, Northwestern University. “Proponents suggest they may reduce avoidable medical errors and improve resident well-being, whereas opponents note that disruptions to continuity of care may worsen outcomes and compromise resident education.”

The researchers found that none of those concerns applied to the new rules.

“The 2011 ACGME duty hour reform was not associated with a change in surgical patient outcomes or resident examination performance,” they said.

The first study examined surgical patient outcomes for the two years prior and two years following the 2011 reforms. Over 200,000 patients were studied from 23 teaching and 31 non-teaching hospitals. Researchers found that the duty hour reform was not associated with a significant change in death or serious illness in 2012-2013. There was also no association between duty hour reform and any other postoperative adverse outcome.

Regarding performance or resident education, the researchers found that average in-training exam scores did not significantly change from 2010 to 2013 for any residents taking written or oral board exams during the post-reform period.

The second study, led by Mitesh S. Patel, M.D., of the Veterans Administration Hospital and Perelman School of Medicine at the University of Pennsylvania, Philadelphia, found very similar results.

Researchers evaluated the duty hour reforms with mortality and readmissions among hospitalized Medicare patients during the first year after the new rules were implemented. This study of over 2.7 million patients concentrated on medical diagnoses of heart attack, stroke, gastrointestinal bleeding, or congestive heart failure or a classification of general, orthopedic, or vascular surgery.

Ultimately, the study found that “there were no significant differences in changes in 30-day mortality rates or 30-day all-cause readmission rates.”

The authors said that goals of improving the quality and safety of patient care, as measured by decreased 30-day mortality and all-cause readmissions rates “were not being achieved. Conversely, concerns that outcomes might actually worsen because of decreased continuity of care have not been borne out.”

Both studies were published in the current issue of the Journal of the American Medical Association.