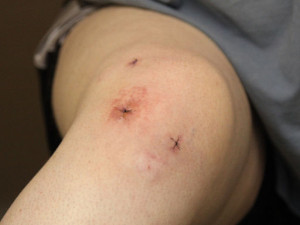 WEDNESDAY, Dec. 3, 2014 (HealthDay News) — A common type of knee surgery may increase the chances of arthritis, a new study suggests.

The procedure repairs tears in the meniscus, a piece of cartilage that acts as a shock absorber. There are two in each knee, and they stabilize the knee joint. Meniscal tears are one of the most common knee injuries, and surgery is often performed to reduce pain and improve joint function, the researchers said.

In their study, the scientists used MRI scans to look at 355 knees with arthritis, and compared them to a similar number of knees without arthritis. The average age of the patients was about 60 and most were overweight.

All 31 knees that were operated on to repair meniscal tears developed arthritis within a year, compared with 59 percent of knees with meniscal damage that did not have surgery.

The study was to be presented Wednesday at the Radiological Society of North America annual meeting in Chicago.

Even though surgery to repair meniscal tears is common, “increasing evidence is emerging that suggests meniscal surgery may be detrimental to the knee joint,” study author Dr. Frank Roemer, from Boston University School of Medicine and the University of Erlangen-Nuremberg in Germany, said in a society news release.

“The indications for meniscal surgery might need to be discussed more carefully in order to avoid accelerated knee joint degeneration,” he suggested.

An alternative to surgery is physical therapy to help maintain and restore knee muscle strength and range of motion. Ice and nonsteroidal anti-inflammatory medications (NSAIDs) are also used to treat pain and symptoms, according to the release.

The U.S. National Library of Medicine has more about meniscus tears.