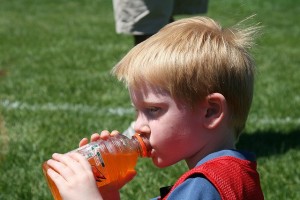 (HealthDay News) — The potential dangers of energy drinks, those highly caffeinated beverages that promise to stave off sleepiness, are well known, but a new study suggests that even young children are at risk.

Although the target markets for energy drinks are typically teens and young adults, more than 40 percent of reports to U.S. poison control centers in a three-year period involved children under the age of 6, said study author Dr. Steven Lipshultz, pediatrician-in-chief at Children’s Hospital of Michigan, in Detroit.

“About half of the calls to the national poison control data system for caffeinated energy drinks related to unintentional exposure for children less than 6,” he noted. In more serious cases, seizures and heart problems were reported, the study found.

Typically, Lipshultz said, a young child finds the drink in the refrigerator and consumes it. “They didn’t go into 7-11 and say ‘I want to buy an energy drink,’ ” he said.

Lipshultz is to present his findings Sunday at the American Heart Association annual meeting in Chicago. Studies presented at medical meetings are viewed as preliminary until published in a peer-reviewed journal.

For the study, Lipshultz and his colleagues analyzed data from the American Association of Poison Control Center’s National Poison Data System. They looked for information about calls concerning energy drink exposures to 55 different poison control centers in the system.

The researchers examined data from October 2010 to September 2013. Before 2010, Lipshultz said, the system did not track energy drinks.

The findings, he said, show that exposure to energy drinks is a continuing health problem. In 2011, after Lipshultz’ previous research pointed out the dangers of energy drinks, the American Academy of Pediatrics said that energy drinks have no place in the diets of children.

Over the time period studied, there were more than 10,000 cases of energy drink exposure, with more than 5,000 being single substance exposures with contents that could be identified. Of those, more than 40 percent involved children under the age of 6.

Among all reports of major problems, more than 50 percent involved cardiovascular problems and more than half included neurologic problems such as seizures.

Some energy drinks have up to 400 milligrams (mg) of caffeine per serving, Lipshultz said, compared to about 100 mg or 150 mg in a typical cup of coffee.

Poisoning by caffeine can occur at levels higher than 400 mg a day in adults, he said, and above 100 mg a day in teens. For children under 12, 2.5 milligrams per every 2.2 pounds of body weight can be a danger, he said.

A group representing beverage makers said energy drinks are in no way intended for consumption by the very young.

“Leading energy drink makers voluntarily place advisory statements on energy drink packaging stating that energy drinks are not intended for children,” the American Beverage Association said in a statement. “They also have voluntarily pledged not to market these products to children or sell them in K-12 schools.”

The group also noted that, “based on the most recent government data reported in the journal Pediatrics, children under 12 have virtually no caffeine consumption from energy drinks.”

“The findings of this study are unfortunately not surprising given the heavy marketing of sports and energy drinks to youth, and national data that have provided evidence these beverages are being consumed by young children,” said Nicole Larson, senior research associate at the University of Minnesota.

The serious health consequences of consumption by young children described in the new study are concerning, she said. The findings point to the need for parents, health professionals, coaches and teachers to continue their efforts to reduce the marketing and availability of energy drinks to children.

Larson reminds parents that the American Academy of Pediatrics recommends against the consumption of energy drinks by children. Instead, she said, parents can help their children to adopt healthy hydration habits “focusing on water to replenish fluids after exercise and the consumption of nutritious beverages such as low-fat milk at meals.”