Breaking News
Home / Law & Politics / How Can Docs Talk To Patients About Guns Without Being Sued?

How Can Docs Talk To Patients About Guns Without Being Sued? 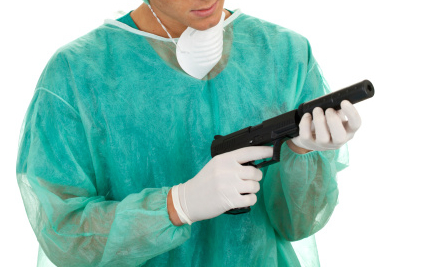 Most doctors are scared of guns.  We’re not referring to the actual use of firearms, but rather the mere discussion of guns.

Are physicians allowed to talk to their patients about guns?  Is the topic medically relevant, particularly regarding mental health?  Will there be legal consequences if the patient is offended?

While there are no concrete answers, the National Medical Council on Gun Violence (NMCGV) is producing a conference to educate doctors and the entire medical community about gun violence and proper clinical procedure.

“Virtually every professional medical association has issued statements or policies about gun violence:  AMA, AAP, ACEP, APA, however there is no clarity about how and when clinicians should discuss gun violence risk with their patients, nor what to do with the information received,” according to the NMCGV.  The organization “seeks to provide medical professionals with evidence-based resources to understand and address gun violence risk where clinically indicated.”

David Hemenway, the director of the Harvard Injury Control Research Center an expert on the public health impact of gun violence, told the New York Times that doctors don’t have a way to talk to their patients about guns.

“That’s one of the reasons we need this conference,” said Hemenway, who will be a featured speaker at the conference. “One of the things we really know about guns is that when a gun is in the house, it increases the risk for suicide.” And those mental health vs. legal restraints discussions are paramount to physicians.

The conference — “Caring for the Patient at Risk for Gun Violence: Medical, Legal, Ethical Issues” — is the nation’s first Continuing Medical Education-accredited program held on gun violence.  It is scheduled for December 6, 2014 in Waltham Woods, MA.  More information about the program can be downloaded here.

Florida has made headlines with its ‘Docs vs Glocks’ gag rules prohibiting physicians from discussing the topic with their patients.  Physician Bernd Wollschlaeger recently challenged the Florida Firearm Owners Privacy Act (FOPA), which prohibits Florida doctors from asking patients if they own or possess firearms.

“The state equally could prohibit doctors from discussing with patients the health risks of smoking or eating too much red meat, no matter what the purpose of the legislation,” Wollschlaeger said.

Last month, Missouri quietly became the second state to institute a version of a gag law against doctors.  The law does say that doctors are not “required” to ask patients about gun ownership, but it leaves enough loopholes to make docs think twice before asking questions.

Mike Weisser, a gun dealer who writes for the Huffington Post and advocates for physician’s rights, said the Missouri law prohibits “physicians from noting gun ownership in a patient records or disclosing the identity of a gun owner to ‘any government entity’ unless the physician is ordered to disclose such information via court order.”