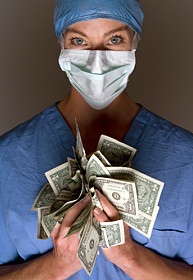 Researchers examined the average prices paid by preferred provider organizations (PPOs) for patient visits to medical practices in 1,058 counties in all 50 states in 2010. PPOs are the most common type of private health insurance plan.

Privately insured patients spent nearly $250 billion on physician services in 2011, so these higher charges could translate to tens of billions of dollars of extra spending, the researchers noted.

They also found that prices at medical practices increased more rapidly between 2003 and 2010 in areas with less competition, according to the study recently published in the Journal of the American Medical Association.

“The research comes out of trying to understand some dramatic changes that have occurred in the health-care system over a couple of decades,” lead author Laurence Baker, a professor of health research and policy at Stanford University School of Medicine, said in a university news release.

One major change is a shift from practices with one or two doctors to larger practices.

“These larger organizations might have better processes in place to optimize care,” said study co-author Kate Bundorf. “But our research also points out, well, wait a minute: We also have to think about the effect on prices and try to balance those two things when we think about how to form policy about these organizations,” Bundorf, an associate professor of health and research policy, said in the news release.

The findings show the need for policies that balance quality of care and spending, according to the researchers.

“Sometimes it can be tempting to say our goals for the health-care system should be only about taking care of patients and doing it as well as possible — we don’t want to worry about the economics. But the truth is we do have to worry about the prices because the bill does come even if you wish it wouldn’t,” Baker said.

The Kaiser Family Foundation has more about health costs.