Forget About Ebola And Get A Flu Shot 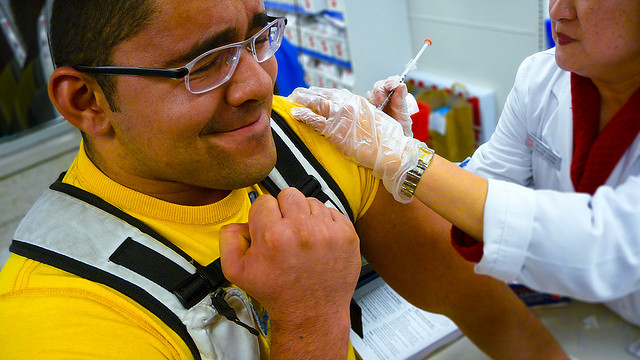 Take a break from worrying about Ebola and get a flu shot this fall. While the Ebola virus has so far affected just four people in the United States, tens of millions are expected to get influenza this season. More than 200,000 of them will be hospitalized and up to 49,000 will likely die from it, according to figures from the Centers for Disease Control and Prevention.

A new HuffPost/YouGov poll of 1,000 adults found that the flu is perceived as only slightly more threatening than the Ebola virus, however. Forty-five percent of people polled said that the flu posed a bigger threat to Americans than Ebola, but a substantial 40 percent said it was the other way around. Fifteen percent said they weren’t sure.

“Ebola is new, mysterious, exotic, highly fatal and strange, and people don’t have a sense of control over it,” says William Schaffner, a professor of preventive medicine and infectious disease at Vanderbilt University.

Influenza, on the other hand, is a familiar illness that people often think they can easily control, Schaffner says. “They think, ‘I could get vaccinated, I could wash my hands’ and prevent it.”

Yet that familiarity may lead to complacency. Flu shots are recommended for just about everyone over six months of age, but less than half of people get vaccinated each year.

Now there’s even more reason to get a shot. The health law requires most health plans to cover a range of preventive benefits at no cost to consumers, including recommended vaccines. The flu shot is one of them. (The only exception is for plans that have been grandfathered under the law.)

The provision making the vaccine available with no out-of-pocket expense is limited to services delivered by a health care provider that is part of the insurer’s network.

Depending on the plan, that could include doctors’ offices, pharmacies or other outlets.