Breaking News
Home / Medical News / High School Football Concussions: Does It Matter Where They Get Hit?

High School Football Concussions: Does It Matter Where They Get Hit? 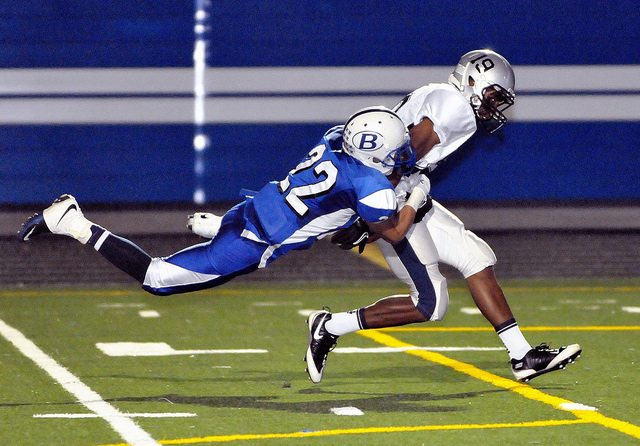 Football season is here.  Professional and youth teams are preparing for the start of the season, which means lots of discussion about fantasy leagues, scholarships, and maybe most of all, concussions.

In recent years, head injuries have unfortunately become part of the game.  No one can be certain why concussions are more common in football today than 20 or 50 years ago, but they are.  The equipment is better, but the players are bigger and stronger.  Rules have been changed to reduce the number of direct hits, particularly head-to-head, and yet concussions continue to flourish.

The Centers for Disease Control estimates 3.8 million sports-related concussions occur in the U.S. each year.  Almost half of those head injuries are from high school football.  Until now, little research has examined concussion outcomes in high school football players as they relate to the area on the head in which the impact occurred.

“Most concussions caused by player-to-player collisions were from front-of-the-head impacts (44.7 percent), followed by the side-of-the-head (22.3 percent), back-of-the- head (5.7 percent), and top-of-the-head (5.5 percent) impacts,” said the authors led by Zachary Y. Kerr, PhD, MPH, from the University of North Carolina. However, “the number of symptoms reported, prevalence of symptoms, symptom resolution time, and length of time to return to play were generally independent of impact location,” according to the article published in the current issue of the journal Pediatrics.

Basically, it doesn’t much matter where on the head the player gets hit. “Our findings suggest that impact location is likely of little use in predicting clinical outcomes, and helping clinicians manage concussed players,” said the authors.

“Overall, most concussions caused by player-to-player collisions were caused by head-to-head contact (71 percent), followed by contact with another player’s body site (i.e. elbow, knee, foot) (23 percent) and contact with the playing surface (after player-player contact) (6.3 percent),” according to the study. Most of the head-to-head concussions occured with the player in the head-up position. Linebackers were most affected by head injuries followed by running backs and defensive tackles.

“Concussions from top-of-the-head impacts, and the resulting risks associated with such impacts, may be reduced by enforcing rules prohibiting players from leading with their head and educating players about tackling using proper “head-up” techniques,” recommended the researchers. “Players must never initiate contact with the helmet, or make contact while head-down.”