Breaking News
Home / Medicine & Business / What’s A Surgeon’s Role In An ACO? Not Much.

What’s A Surgeon’s Role In An ACO? Not Much. 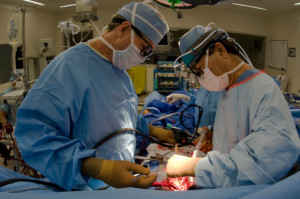 Accountable Care Organizations have given little attention to surgery in the early years of the Medicare program, choosing to focus instead on managing chronic conditions and reducing hospital readmissions.

That’s according to a case study and survey published this week in the journal Health Affairs. The authors conducted case studies at four ACOs in 2012 and sent a survey to all 59 Medicare ACOs in the first year of the program, with 30 responding.

“I’m a surgeon, so I was really curious as this model probably continues to gain steam, what’s this going to mean for me?” said lead author James M. Dupree, a urologist at Baylor College of Medicine. “We found that thus far, very little of the strategic attention seemed to be devoted to surgical care and the integration of surgeons into the ACO.”

That may be a missed opportunity. Surgery represents 50 percent of hospital expenditures, and “thus, even if ACOs are able to achieve their goals in chronic disease management, overlooking the role and cost of surgical care may negate those savings,” the authors write.

They found that surgery was not part of the strategic plan for the first year at any of case study ACOs, and 86 percent of survey respondents rated the priority of reducing unnecessary surgery as “medium,” “low” or “very low.”

This is not surprising given that none of the ACO quality metrics focus on surgery.  But ACOs will likely shift their focus to surgery as the program matures, experts said.

“Any thoughtful leader has a laundry list of things a mile long that they’d like to work on, and working with the surgeons and the specialists just isn’t at the top of the list. It’s something they’d like to do later on,” said David Muhlestein of the consulting firm Leavitt Partners.

It’s not just surgeons, he adds. “Dermatologists, endocrinologists, all the different specialties want to know how they fit in, but generally ACOs are not prioritizing the specialties. They’re focusing on the lowest hanging fruit, and generally the specialties aren’t the lowest hanging fruit.” It’s easier to focus first on things like reducing expensive hospital admissions by managing the care of patients with chronic illnesses, including diabetes.

Reducing unnecessary surgeries might be better achieved by helping primary care physicians change their referral patterns rather than targeting the surgeons themselves, said Muhlestein, who had no role in the survey or case study. Many patients may not need to be referred to a surgeon at all when there’s a medical treatment. And for those that do, he says, “you want to refer to a surgeon who is thoughtful and conservative about the decision to operate.”

The authors of the Health Affairs article also found that the amount of any possible shared savings for surgeons would be smaller than the potential revenues they could generate from additional surgeries. Therefore, changing referral patterns to those surgeons might actually be a more effective way to manage the cost and quality of the care they provide.

“A surgeon who was left out of an ACO, or asked to leave an ACO because of poor performance, would risk losing a referral stream from primary care physicians who participated in the organization,” they wrote.

And ACOs may simply not be the best model for managing surgical quality and cost, said Rob Lazerow of The Advisory Board Company: “The ACO model is only one part of the payment transformation going on right now, and it’s probably more effective at rewarding providers for reducing avoidable care than for making unavoidable care more efficient.”

In other words, ACOs are good at reducing the number of surgeries, but not at making the surgeries that have to happen more efficient.  He says the bundled payment model, in which providers get a set amount of money to handle an episode of care, “is a much more direct way to reward surgeons” who are practicing efficiently.