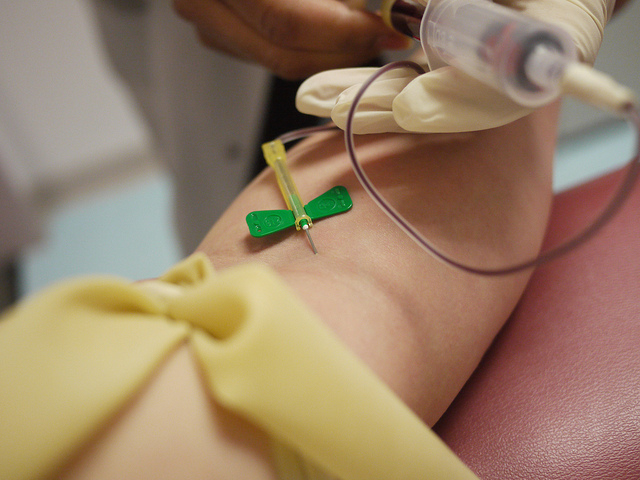 A routine, but highly sensitive, blood test may be able to detect cancer.  Researchers from Stanford University School of Medicine have found a way to monitor levels of tumor DNA circulating in the blood.

“We set out to develop a method that overcomes two major hurdles in the circulating tumor DNA field,” said Maximilian Diehn, MD, PhD, assistant professor of radiation oncology. “First, the technique needs to be very sensitive to detect the very small amounts of tumor DNA present in the blood. Second, to be clinically useful it’s necessary to have a test that works off the shelf for the majority of patients with a given cancer.”

In their study, published in Nature Medicine, the researchers were able to accurately identify about 50 percent of patients with stage-1 lung cancer and all of the patients whose cancers were more advanced.

“Blood cancers like leukemias can be easier to monitor than solid tumors through ease of access to the blood,” said study co-author Ash Alizadeh, MD, PhD, assistant professor of medicine. “By developing a general method for monitoring circulating tumor DNA, we’re in effect trying to transform solid tumors into liquid tumors that can be detected and tracked more easily.”

The new technique — which the Stanford team has named “CAPP-Seq” (Cancer Personalized Profiling by deep Sequencing) — is sensitive enough to detect just one molecule of tumor DNA in a sea of 10,000 healthy DNA molecules in the blood. Although the researchers focused on patients with non-small-cell lung cancer (which includes most lung cancers, including adenocarcinomas, squamous cell carcinoma and large cell carcinoma), the approach should be widely applicable to many different solid tumors throughout the body. It’s also possible that it could one day be used not just to track the progress of a previously diagnosed patient, but also to screen healthy or at-risk populations for signs of trouble.

CAPP-Seq may also be useful as a prognostic tool, the researchers found. The technique detected small levels of circulating tumor DNA in one patient thought to have been successfully treated for the disease; that patient experienced disease recurrence and ultimately died. Conversely, scans of a patient with early stage disease showed a mass thought to represent residual disease after treatment. However, CAPP-Seq detected no circulating tumor DNA, and the patient remained disease-free for the duration of the study.

“This approach could, theoretically, work for any tumor,” Alizadeh said. “We expect it to be broadly applicable across cancers.”