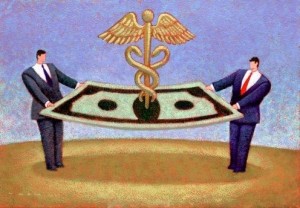 Doctors groups fear their members won’t get paid because of an unusual 90-day grace period for government-subsidized health plans and are urging physicians to check patients’ insurance status before every visit.

“This puts the physician and their patients in a very difficult situation,” said Dr. Ardis Dee Hoven, president of the American Medical Association (AMA), which advised physicians Wednesday about how to minimize their risk.

“If a patient is being treated for a serious illness, that requires ongoing care,” she said. “The physician is having to assume the financial risk for this. That’s the bottom line.”

If an enrollee in a subsidized plan falls behind on their premium payments, the Affordable Care Act requires insurers to cover their medical bills for 30 days.

But for the next 60 days, insurers may “pend,” or hold off paying the claims — and ultimately, deny them if the patient doesn’t catch up on his premiums. That means doctors don’t get paid for their services.  If the insurer ends up canceling the policy after 90 days, doctors can bill patients directly but may face difficulty collecting.

“The doctors get left holding the bag on pending claims,” said Robert Laszewski, a former insurance executive and consultant.

The way things work now, insurers generally cancel a policy if a subscriber falls behind more than 30 days. The insurer is usually on the hook for bills incurred before that cancellation.

The AMA and dozens of other physician groups have urged the Obama administration to spell out how and when insurers must notify physicians when their patients fall behind on premiums. Doctors’ groups got a prompt notification law passed earlier this month by the Washington state legislature.

Some experts worry that doctors who know they may not get paid have a strong incentive to withhold treatment. They may also insist on being paid upfront in full, which could be a breach of their contracts with insurers.

“The reason they want that notification is so they can start denying services,” said Brian Haile, senior vice president for health policy at Jackson Hewitt Tax Service.

If the insurer notifies the physician that a patient is behind on premiums and the insurer is holding up claims payments, “Nine times out of ten the doctor is not going to provide the services — no matter what their network contract says.”

For some medical specialties, treating patients who have fallen behind on their payments could end up being quite costly.

Oncology practices that administer chemotherapy drugs have to purchase the medications, which can cost thousands, or even tens of thousands of dollars. If a patient’s claims are not paid, the cost to the practice is high.

Obstetricians who provide pre-natal care throughout the pregnancy could also take a hit financially if women fall behind on payments when they’re about to deliver their babies.

Hoven, the AMA president, said that physicians are contractually and ethically bound to continue caring for their patients. “Most physicians are not going to turn away these patients, particularly if someone comes in with a life-threatening condition,” she said.

The AMA’s guide to the grace period specifically warns physicians that postponing or rescheduling patients could be a breach of contract because of anti-discrimination clauses in many managed care contracts.

“This is the kind of thing we’re going to watch really closely, and it’s one of the reasons we want to make sure people are careful on the front end selecting plans that are affordable,” said Kirsten Sloan, senior policy director for the American Cancer Society Cancer Action Network.

Dr. Dan McCoy, vice president and chief medical officer for Blue Cross Blue Shield of Texas, said his plan will cover claims throughout the entire 90-day period as a result of a state prompt payment law, but can recoup payments from physicians if patients’ policies are terminated.

He stressed that participating physicians are expected to care for patients throughout that period even if payments have lapsed, adding, “We strongly feel that people who carry a Blue Cross Blue Shield card in their pocket should be treated as members.”

The AMA, meanwhile, encouraged doctors to broach financial concerns with their patients, and explain why it’s important to maintain insurance coverage.

The groups released materials Wednesday, including a sample “Dear Patient” letter explaining that while the doctor will continue to see them during the grace period, “you may be obligated to pay the full cost of services that we provide to you” if insurance is terminated. The letter also encourages patients to discuss changes in their financial circumstances with doctors.

Physicians are also reminded that even if insurers cover claims during the latter 60 days of the grace period, they may seek to recoup those funds if coverage is canceled.