Half of Americans Believe in Medical Conspiracy Theories 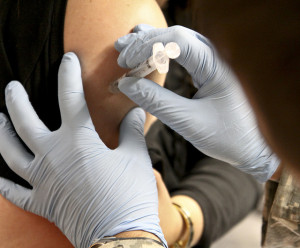 Astronauts landing on the moon, the Holocaust, Seinfeld’s ‘magic loogie’ version of the assassination of John F. Kennedy.  What do all of these events have in common?  They are some of the world’s most famous conspiracy theories. But do we really believe that the government would conspire to keep us sick in order to fulfill a grand plan?

Turns out, we do.

Researchers have found that 49 percent of Americans believe in at least one medical conspiracy theory. And almost one-fifth of us (18 percent) believe in three or more of the proposed theories, according to a study published in JAMA Internal Medicine.

Eric Oliver, professor of political science at the University of Chicago, asked 1,351 people if they agreed or disagreed with any of the following six popular medical conspiracy theories:

The most credible of those theories, according to 37 percent who agreed, was the FDA withholding cures for cancer. And 20 percent of people agree that health officials know the dangers of cell phones as well as the vaccination/autism theories.

The vaccination conspiracy is further fueled by celebrities like Jenny McCarthy, who promotes the evils of vaccinations as the contributing factor to her son’s autism.  That theory was formally denounced by the Lancet, the journal that originally published the theory, and it’s author, Andrew Wakefield, has his medical license revoked due to falsifying his research.

“One of the things that struck us is that people who embrace these beliefs are not less health conscious,” Oliver told NPR. “They’re just less likely to embrace traditional medicine.”

According to the study, there is a direct correlation between belief in these medical conspiracies and the greater use of alternative medicines. “High conspiracists were more likely to buy farm stand or organic foods and use herbal supplements,” said Oliver. “Conversely, they were less likely to use sunscreen or get influenza shots or annual checkups.”