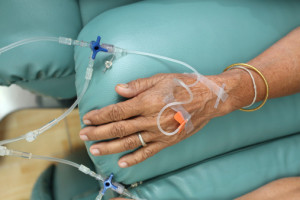 The official cause of my father’s death was prostate cancer.  But it was only after the cancer metastasized to his bones that he finally lost his battle.  One of his final attempts at a cure, he thought, was chemotherapy during what would be the last week of his life.  He thought the chemo would help him get up and walk out of the hospital.  The doctors thought it would ease Dad’s pain and provide palliative care.

A new study published today in the journal BMJ shows that terminal cancer patients who receive chemotherapy as end-of-life treatment are less likely to die where they want to and more likely to receive unnecessary procedures.

“We often wait until patients stop chemotherapy before asking them about where and how they want to die, but this study shows we need to ask patients about their preferences while they are receiving chemotherapy to ensure they receive the kind of care they want near death,” said Dr. Alexi Wright, medical oncologist at Dana-Farber Cancer Institute and lead author of the study.

Previous studies haves shown that as many as two-thirds of terminal cancer patients did not fully understand that end-of-life chemo was meant as palliative care rather than a possible cure.  In a 2012 study published in the New England Journal of Medicine, 69 percent of terminal lung cancer patients and 81 percent terminal colorectal cancer patients “did not report understanding that chemotherapy was not at all likely to cure their cancer,” according to the authors. “Physicians may be able to improve patients’ understanding, but this may come at the cost of patients’ satisfaction with them.”

In the current study, patients getting palliative chemotherapy were less likely to talk to their doctor about end-of-life care, to complete Do-Not-Resuscitate orders, or to even acknowledge they were terminally ill, according to senior author Dr. Holly Prigerson of Weill Cornell Medical College. “The results highlight the need for more effective communication by doctors of terminal prognoses and the likely outcomes of chemotherapy for these patients.”

Researchers studied 386 patients in the Coping with Cancer trial, which followed terminally ill patients through and after end-of-life care.  The researchers examined patient charts — in addition to speaking with each patient’s caregiver, when available — to determine the type of care received in the final week of life. Patients who received palliative chemotherapy had more invasive medical procedures in the last week of their lives and died in ICUs more frequently than patients who did not receive chemo.

“The vast majority of patients in this study wanted palliative chemotherapy if it might increase their survival by as little as a week,” said Dr. Wright.  That was my father’s hope, too.