U.S. Soldiers Have Mental Health Disorders Prior to Enlisting 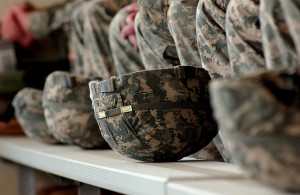 The leading cause of death among soldiers in the U.S. military is mental illness.  In 2009, suicides by soldiers were the highest seen since the Vietnam War. But a new study shows that war, or active military duty, is not the underlying cause.  Most of the soldiers with suicidal tendencies had mental disorders prior to entering the military.

The findings came from the Army Study to Assess Risk and Resilience in Servicemembers (Army STARRS), the largest study of mental health risk among U.S. Army personnel.

Researchers set out to determine the rate of mental disorders among non-deployed, U.S. Army personnel with onsets prior to enlistment.  They found that nearly half of all soldiers with suicidal tendencies had made an initial attempt to take their own life before entering the military. And up to 80 percent of soldiers with a documented mental illness had reported first onset of at least one disorder prior to enlistment.

Between 2004 and 2009, the suicide rate among active military personnel more than doubled to over 23 per 100,000 soldiers.  A total of 569 soldier deaths were ruled suicides during that period.

“It is striking that nearly 50 percent of the soldiers who attempted suicide made their first attempt before joining the Army, as history of suicide attempts is asked about in recruitment interviews and applicants who report such a history typically are excluded from service,” said Matthew Nock, Professor of Psychology at Harvard University and lead author of a second study.

Some experts suggest that more efficient screening of military recruits and active personnel may lead to better support for those with preexisting mental disorders.

“Whatever deployment-related factors may be contributing to Army suicides, it is only part of the story because soldiers who were never deployed also exhibited an elevated risk of suicide,” said Matthew Friedman, MD, of the National Center for PTSD, who wrote an accompanying editorial in JAMA.

Researchers also found intermittent explosive disorder was much more prevalent among soldiers than civilians (11 percent vs 2 percent).  As with the suicidal tendencies, soldiers exhibited signs of the anger disorder 75 percent of the time prior to enlisting.

“The people at highest risk of making an attempt struggled with depression and anxiety, or post-traumatic stress, in combination with impulsiveness and aggression,” Nock told the New York Times. “The former gets people thinking about suicide, and the latter gets them to act on those thoughts.”