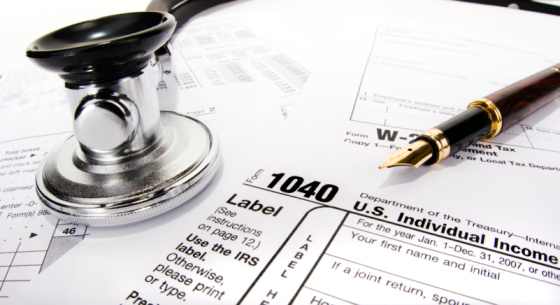 Are you an owner of a medical practice taxed as a flow-through entity such as an S-corporation? Most physicians are.

In working with over 1,000 doctors, we estimate that 70 percent of medical practices operate as S-corporations. As such, you may be paid both as an employee of the practice, receiving a W-2, and as an owner of the practice through a K-1 distribution. The key difference between income earned as employee compensation (W-2) and that earned as a K-1 profit distribution is that you pay FICA (Medicare and Social Security) tax on the income earned as an employee but not necessarily on K-1 profit distributions. While the large Social Security portion of FICA phases out after income of $117,000 in 2014, the Medicare tax has no phase-out.

Also, under the Affordable Care Act, the Medicare tax increased from 2.9 percent to 3.8 percent in 2013 for higher income taxpayers. While this is only a 3.8 percent tax, we have seen poor advice here cost physicians $10,000 or more each year, every year of their career. Over one’s career, this can amount to nearly half a million dollars of lost capital for no good reason.

Let’s look at two examples. Do you see yourself in either of these?

The above cases are hypotheticals and any change or deviation from the circumstances discussed above could affect the outcome. However, obviously, you would not want to be Dr. Smith. Yet, we are continually astounded when see so many physicians come to us in the same position – having all, or most, of their income treated as W-2 when in fact much of it is earned because of the profitability of the practice rather than the doctor’s personal services. Wouldn’t all of us prefer to be in Dr. Jones’ situation? If we are allowed to be – then, yes. So, the question really comes down to this: What are the tax rules that govern this situation?

In discussions with a number of CPAs with over 15 years of experience, the consensus is this: You can reasonably be paid as a W-2 salary what one would need to pay an associate physician with the same training to come join your practice. The rest of your compensation can be characterized as distributions. One CPA, practicing for over 20 years, commented “this is what I do for my clients, and when the issue has been discussed in audits over the years, the IRS finds it very difficult to argue that our client should be paid more on their W-2 than a staff member doing the same job.”

Looking again at the examples above, Dr. Smith could easily attract another cardiologist to his practice paying $250,000 salary. This would allow him to avoid Medicare tax on $150,000 – saving over $4,000 annually. Not coincidentally, Dr. Jones is in the right situation.

As hard as physicians work, throwing away hundreds of thousands of dollars over a career – for no good reason – is a shame. Yet it happens every day.

David B. Mandell, JD, MBA, is an attorney and principal of the financial consulting firm OJM Group, where Carole C. Foos, CPA works as a tax consultant. They can be reached at 877-656-4362 or mandell@ojmgroup.com.